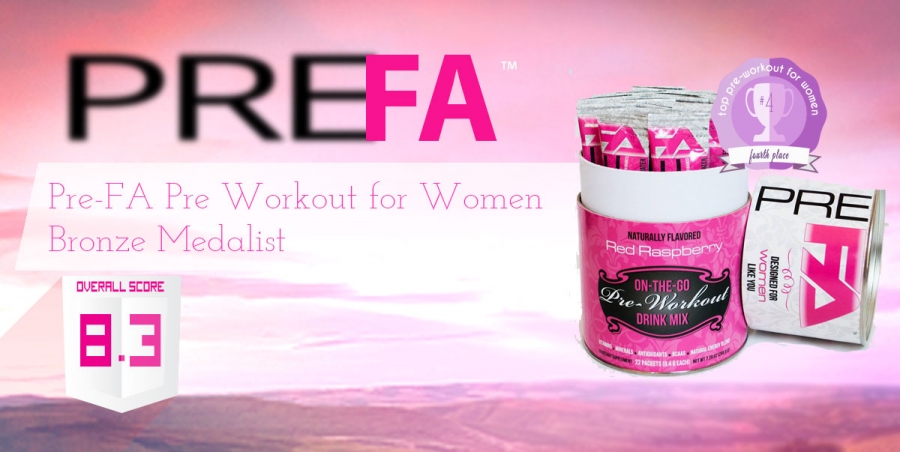 We've teamed up with the good folks at Pink Nutrition and are thrilled to offer you a special discount. Use code BPW10 at checkout for $10 off your order!

Pre FA comes to us from the foundling company Pink Nutrition, which has a very 'mom and pop' feel in its infancy. The company has released their first product Pre FA as a pre workout supplement for women to contend with the likes of Toned, Fitmiss, and Fem Fire. The team here at BPW had to get our hands on a container of Pre FA and see if it could hold its own. Lo and behold- Pre FA didn't just hold its own- it quickly jumped to fourth place in among the top pre workouts for women! The size of the fight in the dog is what counts and Pink Nutrition is proof...

Pre FA is a supplement that popped onto our radar on social media. After quickly purchasing a container online, the team set to work bench-testing the formula against a myriad of different training styles. For me personally, I took Pre FA prior to a yoga strength session. This style of training requires a significant degree of focus and endurance even though no additional resistance is applied beyond bodyweight. I cracked open our tin of Pre FA about a half hour before my session. I have to give props to the folks at Pink- they created a truly attractive and feminine package setup right off the bat. The sample sticks may have been 'borrowed' from the Fitmiss line- but the imitation is successful. The red raspberry taste is actually comparable to the mountain raspberry flavor found in UN's gold-medalist TONED. It is fairly light and refreshing. We have to give credit to Pre FA pre workouts for using natural flavors- it goes a long way.

As for the way Pre FA pre-workout drink performed- the general consensus among testers was that we were all pleasantly surprised. Some of the terminology provided for this write-up included the phrases 'balanced', 'smooth', and 'long-lasting' in terms of the performance-boosting effects. I personally agree that the experience is fairly well balanced. There is definitely some added energy- especially when you approach the upper limits of your training capacity. This is a much welcomed effect and is the biggest reason why this product cracked the top 5 IMO. Pre FA performs nicely, and for a good duration of the workout as a function of the F.A. Performance blend, which is combined with sugar as a sweetener. It's a bold move to use real sugar in a women's pre workout, as several customers are wary of any additional simple carbs in their diet. However, the quick hit of energy provided by simple dextrose actually works well with the active ingredients and enhances the energy side of this product.

While Pre FA is a successful and welcome addition to the BPW top 10 for 2013, it failed to secure a podium position for a few key reasons. The first being the price. The company charges 50 dollars for 22 servings, which puts the cost/serving at a rigid $2.27- higher than any other pre workout for women. At this price, we had to grade Pre FA accordingly. It had to justify the price-tag, and to be honest, it would've had to knock our socks off and it didn't. It performed will on many levels, including energy and endurance. But at the price level Pink Nutrition set for it, the product needs a differentiator  beyond a pretty label.

In addition to its unfavorable price, PreFA is, sadly, a proprietary blend. The dosages of each are not explicitly listed, leaving the user guessing how much of each active compound is contained per serving. To get even more nit-picky, the first ingredient listed on the label is L-Arginine Alpha Ketoglutarate, better known as Arginine AKG. This once glorified 'pump' ingredient was found in literally every men's pre-workout formula of yesterday, until it was discovered that it literally was  useless for improving athletic performance OR improving the pump. It has since been replaced by agmatine sulfate, which is curiously included in Fitmiss' Ignite offering.

Pre FA performs as advertised. It does not over-achieve and it does not under-achieve. In the supplement industry- you call that a win. Good job to Pink Nutrition for putting themselves out there in a highly competitive market and holding your own!