Tone It Up Plant-Based Protein Review. Should You Try it? 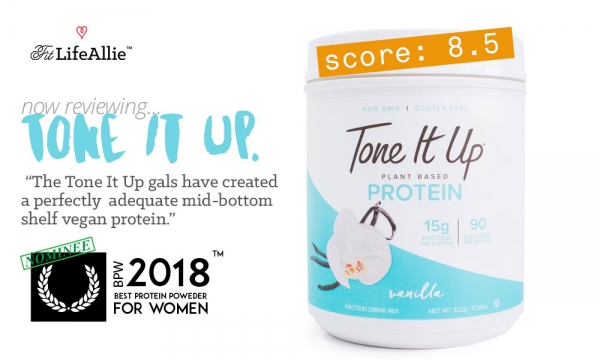 Tone It Up Plant-Based Protein Reviews are easy enough to find since this protein powder is probably one of the most popular protein supplements on the face of the earth due to the popularity of the Tone It Up duo: Karena and Katrina. I’ve been obsessed with the Tone It Up girls for such a long time that it’s almost creepy. But you guys. I’ve been following them from the START. Like the VERY start. I’m talking way back. Like before social media even existed I’ve been following them. And that’s because they’re literally so inspiring and care so much about their community. But before I get too much into my Woman-Crush blabbering, let me tell you what to expect in this Tone It Up Vegan protein review: First, lots of informal writing. That’s just my style. Second, I promise we actually WILL go into extreme detail concerning what exactly is in the Tone It Up Plant-Based protein, what the best FLAVOR of TIU protein is, and then finally we’ll analyze the packaging. Because that’s fun for me. Okay. So if that all sounds great to you, why don’t we dive on in to this Tone It Up Plant-Based Protein Review!

I actually found my Tone It Up Plant-Based Protein protein at TARGET of all places. Which is pretty cool to think about, these Tone It Up ladies have been going strong for so many years and way back when, it was such a small community. And now. Target. I mean. TARGET. So cool. But yeah I was surprised to find this Tone It Up protein at Target- where it was priced at just like twenty bucks per tub. I picked up two tubs, one of each flavor, because I mean why not support the gals. The first thing I’ll talk about in this Tone It Up Plant-Based Protein review is the big thing you’re wondering- does Tone It Up protein TASTE any good?

Does Tone It Up Plant-Based Protein Taste Good?

Sigh. So. Here’s where my review unfortunately is going to take a very moderate detour from the sunshine and rainbow love-fest that I have for the TIU girls. I do not find this protein to be one of the better tasting protein powders. And you guys know I’ve reviewed several hundred of these proteins. I’ve also reviewed COUNTLESS Vegan protein powders recently, and almost all of them taste the same. The tough thing for Tone It Up Protein is that I actually think it might taste just a little bit below average. BUT if you mix it with sweetened almond milk it DOES become a little more enjoyable. Let me talk about the two flavors.

What’s the BEST FLAVOR of Tone It Up Plant-Based Protein?

There are two flavors of Tone It Up Vegan protein. I bet you can guess what they are. Yep. You got it. Chocolate and Vanilla. And one of them tastes way better than the other. Can you guess which? MEHHT. WRONG. It’s actually the VANILLA flavor that tastes better. The chocolate flavor of Tone It Up Plant-Based Protein is OKAY but has such a VAGUE chocolate flavor that you almost wonder if there’s much more than just a sprinkle of cocoa in there at all! I like the vanilla because even though, let’s be serious, it’s not the best thing I’ve ever drank, at least it has a more discernible flavor beyond just that ‘pea’ flavor that most of these Vegan proteins taste like. If you read my Ora Organic Protein review yesterday than you know how much these proteins can taste like just straight up pea protein.

But the Tone It Up proteins, while they DO still taste very earthy, are drinkable. If you mix them with just water you aren’t likely to be impressed, but if you mix them with sweetened almond milk, they texture gets much improved, and the sweetness of course does as well. I think it’s overall an average-tasting vegan protein but it does grow on you a little bit in that sweetened almond milk. Again, get the vanilla flavor if you have your heart set on this Tone It Up Vegan protein. Let me tell you a little about the formulation now.

What’s in Tone It Up Vegan Protein?

Tone It Up Vegan protein is an interesting combination of plant-based ingredients and more traditional flavoring ingredients that contribute to it’s composition. I like some things about the formula, while other aspects I don’t like quite as much. I’ll list out the ingredients now and we’ll discuss them:

So as you can see, this is a VERY minimalist protein recipe. In some ways it does pay tribute to the very early Tone It Up protein which was called ‘Perfect Fit’ (remember that stuff?). I think the new name is better and the new formula is a LITTLE bit better. The Tone It Up Plant-Based Protein is primarily a pea protein formula, much like, well, ALL vegan proteins I’ve reviewed recently (PEScience, Revere, Huel, Ora, IdealRaw, etc, etc. I don’t REALLY mind the fact that there aren’t other things in here besides pea protein and the flavorings. Some brands will load up their protein with a dusting of fancy-sounding superfoods (cough cough ORA Organic), but really they aren’t putting enough in there to actually do anything. With this one. At least it’s more what you see is what you get. There is also some Pumpkin Seed protein in here. But I kind of doubt there’s a ton of it in here. The blend still tastes very ‘Pea-ey’ to me. But let’s look at the macros real quick as well:

Tone It Up Plant-Based Protein Macros:

So as you can see, Tone It Up Plant-Based Protein has very few calories per serving, and you can see that is mostly due to this being a slightly smaller scoop size than some of the others. There are only 15g of protein per serving, which is still plenty, but it’s also less than some other Vegan protein powders. There is a decent amount of sodium (salt) in here, and not much else to report. I don’t have an issue with the macros even though the salt might be alarming for some folks. So I’ll Tone It up about an 8/10 on the formulation. I don’t mind it at all. Let’s move on to packaging.

Tone It Up Protein Looks Just the Way You Would Expect.

Tone it Up has always brought a super fun, playful vibe to fitness for me, and so I wasn’t really surprised to see that their new Vegan protein had a similarly fun and laid back vibe. Almost ‘beachy’ is the way I would describe it. I enjoy it tremendously. The Tone It Up Plant-Based proteins use different colors for the different flavors. They use a aqua/blue for the vanilla flavor, and purple to denote the chocolate flavor. I think the packaging is very pure and simple and fun. I will say it’s not the most COMPLEX label, graphically-speaking, but I think the best way to summarize my thoughts on the Tone It Up Plant-Based Protein packaging is that it is both appropriate, and overall just gets the job done. The Tone It Up logo is the casual ‘hand-written’ font that goes along with the playful, relaxed vibe. Both flavors use different flavor graphics to visually convey the flavor. For the vanilla its a big vanilla bean with the white flower. For the chocolate, a large cocoa bar graphic. I will give Tone It Up Plant-Based Protein a 9/10 on the packaging. It’s nicely done.

The Tone It Up gals have created a perfectly adequate plant-based protein powder. I think the flavor COULD be improved a touch, as could he formulation, but for a bottom-mid shelf vegan protein it’s perfectly fine.*