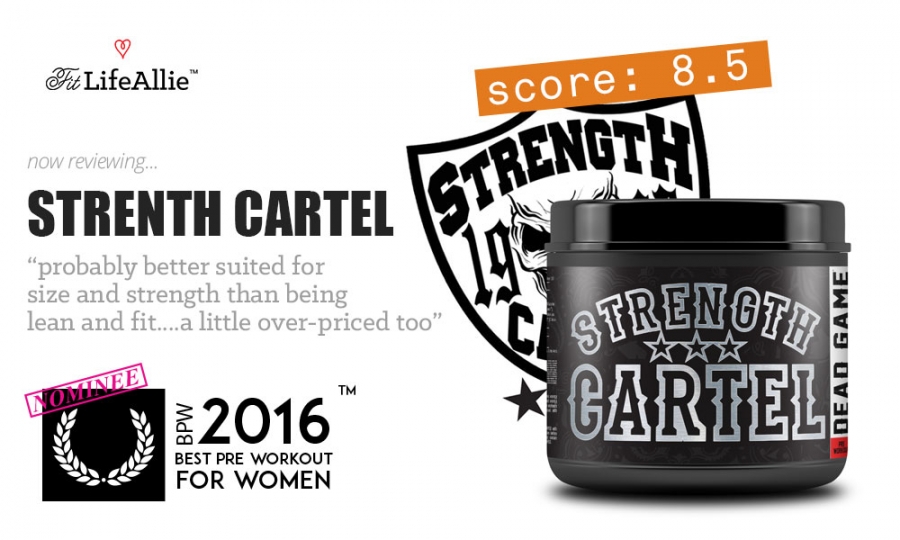 The Strength Cartel, from my understanding, is a brand that came from one of 5 Percent Nutrition’s athletes who left that brand, potentially on bad terms, to start Strength Cartel. I don’t really know the whole story, but I did hear that there were even some fisticuffs between 5 Percent and Strength Cartel at the LA Fit Expo. Which is. Insane. But. Sigh. I don’t even know why I’m reviewing this one since literally no ladies are going to be down to try Strength Cartel because it’s such a masculine feeling brand. But. I’ll still take some time to tell you all about how it worked for  me, starting with the taste.

The real story is that my boyfriend had some of this Strength Cartel Dead Game pre workout laying out on the counter this morning, and since I hadn’t done a proper pre workout review in a couple days, I figured I might as well take it on myself to do this one. I took one scoop of the raspberry lemonade flavor, and thought that it actually tastes okay. The product does have a little bit of a sour aftertaste that lingers for a split second longer than I wish it did, but it’s really not THAT bad. I thought that the sweetness was on point, and although it was very artificial tasting, I did enjoy the flavor of Strength Cartel Dead Game pre workout. I finished up my glass, and headed into the gym for a heavy leg day.

Of course it does. That product is so loaded up with stimulants that it can’t NOT work. I had really impressive energy levels through the first 45 minutes of my workout, fueled by the Strength Cartel cocktail of energizing ingredients. I found my strength levels were boosted, and I definitely had better pumps too. Pumps aren’t usually my thing, and as you know from my Natural Science Creation Pump Infusion review, I think too much pump is a bad thing. But Strength Cartel Pre Workout has a nice energizing effect. I thought that the endurance could’ve been improved for this pre workout, but I think most of their customers are looking for the strength and size. So. Again, I don’t expect too too many women will be taking this one. Let me talk a little bit about the formula now.

The supplement facts support my theory and back up my experience in the gym. This pre workout doesn’t really leave any stone unturned as far as stimulant ingredients. Just look at this roster:

Whew. That’s a pretty intense formula guys. You can tell that any pre workout containing TWO different types of synephrine is going to give some pretty crazy energy. The product has almost double the number of stimulants as most other pre workouts, which is something I definitely felt in the gym. And that brings me to something I wanted to touch on which is

The answer is definitely YES, but you definitely want to make sure you are being wary of the stimulant content, as well as the creatine. There are two full grams of creatine in the Strength Cartel Dead Game pre workout, which will absolutely lead to some size and strength. But at the same time it’ll make you LOOK bigger at the expense of leanness. So your cuts and muscle tone definitely will take a hit when you are taking Strength Cartel Dead Game pre workout. But let’s talk about the packaging now.

Strength Cartel has a sort of ‘Latino Heat’ almost Los Angeles Gangbanger vibe to it that is basically a huge turnoff for me but I’m sure a certain demographic of males are drawn to it. The color theme is black and silver, and has an interesting combination of bold, graffiti style fonts and three starts (funny that’s what I might give this Strength Cartel pre workout!) But yeah I mean. The product looks okay for the vibe they are going for. I’m not in love with the Strength Cartel Dead Game pre workout on an appearance front but it’s alright.

I’m giving Strength Cartel Dead Game pre workout a very fair and average grade. I think for someone going for more of a bodybuilding or powerlifting fitness goal this is an okay pre workout (albeit a very expensive one) but for me where I just want to be lean and fit, I’ll probably stick with one of my old tried and true pre workouts. But Strength Cartel pre workout is alright. Maybe a little too expensive at $59.99, but it’s alright.*