RokHardBody Hulk Juice Review: I Went Crazy in the Gym 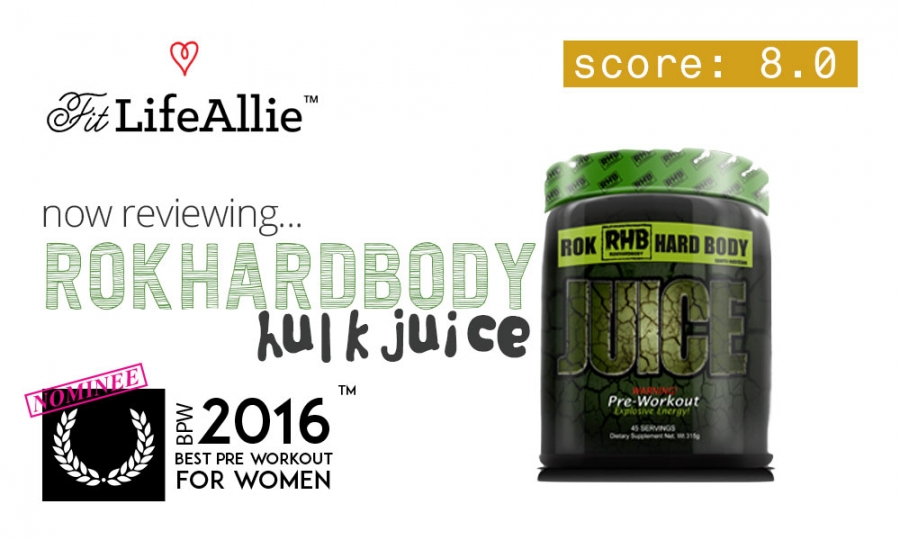 Hola and welcome to my RokhardBody Juice Pre Workout Review. If this ends up being a bilingual review, or a spanglish review, it will be because I just came from Ash Wednesday mass, and it was in two languages. At once. Don’t ask me how. But somehow it wasn’t twice as long as a usual mass. Oh boy we’re pretty far off track already. How did this happen? Focus Allie. Focus. Speaking of focus. We’re going to chat a bit about a pre workout that is supposed to help you do just that. Focus. And some other stuff. Like have a bunch of energy and run around the gym like a madwoman and crush your workout. In this Rokhardbody Hulk Juice Pre Workout Review, we’re going to do quite a few things. The first thing we’ll do is talk about the flavors. I will tell you which flavor is better- the Jolly Rancher or the Candy Lemonade. Then we’ll talk performance. I want you to know exactly what it’s like to experience Hulk Juice when you hit the gym. Specifically the weights. After that, we’ll talk formula and supplement facts. And lastly we’ll talk packaging before I wrap up the review with the Rokhardbody review summary and final grade. Let’s get started.

Rokhardbody is one of those companies that sort of make you cringe. While their Instagram following is sizable, and the product line has grown to match, there’s just something, well, that I just don’t like about this company. I don’t want to use the word ‘trashy’, but, well…it feels like a ‘trashy’ brand. Maybe I’m just jealous of the buxom ‘RHB’ ‘Dolls’ that they feature on their page. I’m sure if I looked like them I’d be less jealous by what I see. But for skinny old flat-chested me, I can’t help but sort of resent the RHB Dolls and the brand they represent. But I’ll try not to let my own insecurities influence my Hulk Juice pre workout review. Let’s start by talking about the flavor.

Well this isn’t such a bad start for RHB Pre Workout! Companies have done much worse in the flavor section than this. Believe me. Or just go reading through a few of our hundred pre workout reviews. We’ve seen it all here, trust me. But this pre workout tastes pretty decent. I convinced my swolemate (that term applies to friends of the same sex, right?), Alex, to buy the Candy Lemonade Flavor so that we could both try the two flavors of RHB Hulk Juice pre workout. Here are my thoughts on each.

Purple Jolly Rancher: This flavor could actually have been called ‘cough syrup’, but they decided instead to call it Jolly Rancher. Lol. I guess both taste good…but only one makes you FEEL good too. Whoops did I say that out loud. Lol. Jk. This flavor of Hulk Juice is good. It’s not the best-tasting pre workout I’ve ever tried but it’s sweet and full of flavor. It’s some sort of grape/berry flavor. Just think of cough syrup. A good cough syrup.

Candy Lemonade: You already know what this one tastes like too. Both flavors are tangy and sweet- this one even more-so than the Purple Jolly Rancher for both aspects. I actually found this flavor to be TOO tangy for me. Remember those sour Warheads that we used to eat back when we were kids? Yeah. I’m sure our parents do too- especially the dentist bills for all our cavities that they caused! My point is that the RHB Hulk Juice pre workout tastes exactly like a lemon warhead. It’s very tasty but a bit sour for me.

Once again- not such a bad grade for RHB pre workout. Many of our pre workouts have scored below 8.3. But RHB has earned a well-deserved ‘B’ on performance. That comes from having a kick-ass workout. Let me tell you. This pre workout packs a punch and then some. I don’t know if I would want to take it EVERY DAY, for reasons I’ll discuss in the formula grade section, but I’ll tell you that I really enjoyed my Hulk Juice-powered workout this afternoon. I think Alex did too until her heart stopped and she died mid-set. Just kidding. I know. That’s a dark sense of humor.

But no really. We each took a scoop of RHB pre workout about twenty minutes prior to our workout today. I went in to do a back workout, with some ab work on either side. Alex did some cardio but then decided to hit the weights like me. Because she wants to look like me. Not really. She’s way hotter. After about 10 minutes of abs, I could REALLY feel RHB Hulk Juice start to work its magic. My energy was peaking. My sets became really easy. A rush of euphoric energy washed over me. I was in a state of pre workout euphoria! My music was wonderful. Everything was so good. I wish I could capture that feeling in a bottle and drink it when I need to. Alas. It didn’t last forever. I still had a great workout, but that initial ‘limitless’ feeling wore off relatively quickly. So I will give it an 8.3 on performance. My strength was heightened for most of the workout, even after the initial rush wore off. I will say my heart felt like it was racing just a tiny bit, and here’s why:

Here’s where things start to go a little south on RHB Hulk Juice. There are only 8 ingredients in this pre workout, and each one is in a proprietary blend- which I don’t really like. This just means you don’t really know how much of each ingredient you are getting in the scoop. Here are the 8 ingredients:

So notice the bold ingredients. These are the three that I’ll focus on.

You know I’m a huge packaging nut- and RHB ALMOST stole my heart with this packaging. It’s SUPER masculine, but still kind of sexy in a way. It certainly matches the RHB attitude of ‘in-your-face’ extreme-ism. This pre workout has a bright green lid, and a crazy ‘hulk’ pattern that dominates the label. I wonder if they are even allowed to use the name Hulk along with all the blatant visual cues that pay tribute to the Marvel superhero. I suppose Bruce Banner would approve of this design. I think that’s why I am drawn to it as well. I’m a comic book nerd at heart, so I do like this design very much. A bit of critique that I have is that they should have made the shades of green have the same levels of blue and red in them. The ‘RHB’ strip across the top sort of conflicts with the darker shades of the majority of the Hulk Juice label, while the lid is just another shade completely. It doesn’t make for a very unified whole. But HULK DON’T CARE ABOUT DESIGN. HULK SMASH. Lol. Yeah. In summary this packaging matches the product. It’s edgy and zero fuarks are given. Nice job RHB design squad.

When I’m in a rebellious mood and need to vent on some weights- I will probably take this pre workout again. It’s certainly not a daily driver for me because of the creatine and yohimbe and PEA- but as a little ‘fun’ powder for special occasions I do like the Hulk Juice Pre Workout. It’s a little over-priced, but that’s ok.*