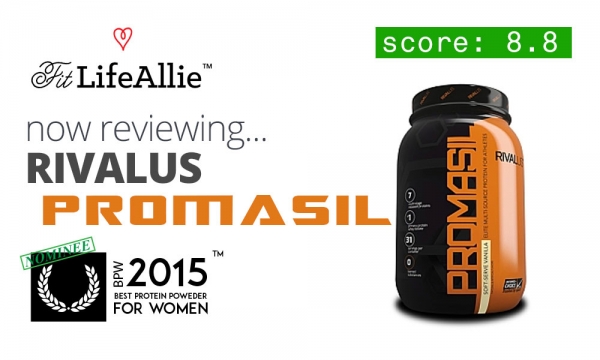 Rival-us or Rivalus Promasil reviews have finally come to the BPW so welcome one, welcome all. I hope you are ready for yet another protein powder review here on the show. I think you will enjoy this review more than my last review because I’m going to put tons of heart and soul into this Promasil review. Actually I’m not because I don’t have a heart and I’m a piece of you-know-what. Eek. Can you tell someone is having relationship problems today. Yeah. I bet you can. Well, we’ll be sure to get into that first and foremost since I clearly have to get it off my chest. But after I’m done my sob story we’ll actually talk about Promasil, I promise. As with all my protein reviews, we’ll go into painstaking detail on the formula, the flavors, and even the packaging. So without spending too much time on this introduction, why don’t we get the box of Kleenex out and start this Rivalus Promasil Review, stat.

Ugh. Why do I always have to have these relationship woes right when I don’t want them. I was riding such a high on life and frankly things between us when, wouldn’t you know it, my cell phone got me in trouble. Bear with me- we’ll get to Promasil Protein in a second I promise. If you’ve been in a fight with your significant other recently, than I would bet my bottom dollar it started with a cell phone. Now. I don’t want to defend cheaters, liars, or someone that is doing something totally foul. That’s not what I’m going to do. Hm. Well, you know what, I’m not even going to try and defend myself. I said some mean things behind someone’s back, and when it came time to face the music, I’m getting what I deserve. So why should I sit here and try and make an excuse for myself. If I want him back, I will go out and do everything in my power to get him back, and apologize. And if that’s not good enough, than so be it. But you’re here for a Rivalus Review, not a Doctor Phil sob-story. I’ll get my big-girl pants on and dive in.

I had the benefit of trying both flavors of Promasil- so why don’t I tell you about each of them and weave into that which one I found to be superior of the two. As with every other protein powder in the world, there are two flavors of Promasil. I bet you can guess them. I know you can guess them. They are, queue drumroll, chocolate and soft serve vanilla. Pretty crazy right? Rivalus definitely didn’t hurt themselves coming up with this menu, that’s for sure. I actually got two free tubs of Promasil sent to me and so here are my thoughts on each of the two flavors:

Chocolate: As you know from my Advocare Meal Replacement Review, I usually like the chocolate better than the vanilla. With very few exceptions, the bitterness of chocolate is almost always the proper route for me. Rivalus Promasil got one thing right with their flavoring- and that is the sweetness and creaminess level of Promasil. This is a protein powder that is supposedly trusted by Pro & Olympic Athletes, so I feel like I had some high expectations around the flavor. If it’s really good enough for an olympian, it should be good enough for me, right? That is right. But for chocolate only. The chocolate flavor is very creamy, very sweet, but strangely I love the way it tastes. I’m not always crazy about super sweet proteins. But this one was unbelievably tasty.

Vanilla Soft Serve: I don’t know whos idea it was to name this flavor of protein powder ‘soft serve’, but it was the wrong decision. Not only did I not pick up ANY ‘soft serve’ flavors in this protein powder, I could hardly determine any authentic vanilla flavors. Sure, you can tell this is a vanilla protein powder. But it’s such a poor representation of vanilla that there is no doubt in my mind that some really low-quality flavoring ingredients were used in it’s formulation. It’s almost as if the chocolate-flavored Promasil was made in one factory, and the vanilla in another. I give the chocolate a 9.2 out of 10 and the vanilla a 7.8. That average out to 8.4 out of 10. Thus, the best flavor of Promasil is absolutely the chocolate.

While I wasn’t terribly enthused about the way the vanilla flavor came out, I AM enthused about the Promasil formula. You know what’s weird? The name. ‘Promasil’. It almost sounds like a prescription drug of some kind. It makes no sense to me who named this product or what the word Promasil is even supposed to mean. It sounds like something you would soak in to get rid of chickenpox. Doesn’t it? I think so anyways. But. Hey. I don’t judge based on names. Only looks. Lol. Ugh. This is the kind of stuff that gets me in trouble. Sigh.

But let’s talk about this formula. The product has a 7 Multi-Stage Released Protein formula, of which the number 1 primary protein is whey isolate. The 7 protein sources include:

Wow. Goat’s milk. Goat’s milk protein powder? Like. Who knew that even existed. Lol. Certainly not me. I think that is one of a few things I really like about this formula. The other thing that I really like about Promasil is that it has really solid macros. What are macros, you ask? That is the ratio of the key nutrition facts in your protein supplement. So. For Promasil, you have 110 calories, 24 grams of protein, 2 carbs, 0 sugars, 0 fibers, and only 1 gram of fat. That is a lean, mean, muscle building machine. This product also has a high proportion of calories from protein alone versus other sources. 24 * 4 kcal/g = 96 calories of the 110 total are from pure protein. That’s just flat out tough to beat- especially when it’s ALL from complete proteins- unlike some of the protein spiked proteins like Rule 1 and Advocare.

I can’t believe I made it this deep into the Promasil Review without re-iterating my loathing of Rivalus packaging. I definitely mentioned multiple times in my Complex5 Review how much I do not like the orange and black color scheme that Rivalus uses. It just reminds me of some sort of crazy pumpkin protein. It’s not up my alley at all. The orange might just be the ugliest shade of orange humanly possible. And when combined with the black you really do feel like everything has a Halloween theme. It’s not smart branding-wise, and I’m honestly baffled why nobody at Rivalus pullled the plug on this design. I think if it weren’t for the color scheme, this product might actually have come out ok. The big ‘Promasil’ product name is bold and proud and sweeps down the side of the container vertically. Key product stats are smartly arranged adjacent to the ‘Promasil’ lettering, and stand in sharp contrast against the black area of the label. The flavor graphic should be more explicit and use imagery, but it contrasts nicely and is easily read. The Rivalus logo and ‘Informed Choice’ logos occupy the top and bottom halves of the orange portion of the label to round out the rest of the visual elements. Overall it’s an OK package, but is really hindered by poor color choice.

You can find Promasil for a really affordable price of $39.99 on GNC.com and other outlets for the 31 serving container. Given the high quality of the proteins used in the product, I have no problem spending that amount of money per serving. Despite one of the flavors being below-average, and a less-than-perfect label design, I think Rivalus Promasil is a really wonderful value protein.*