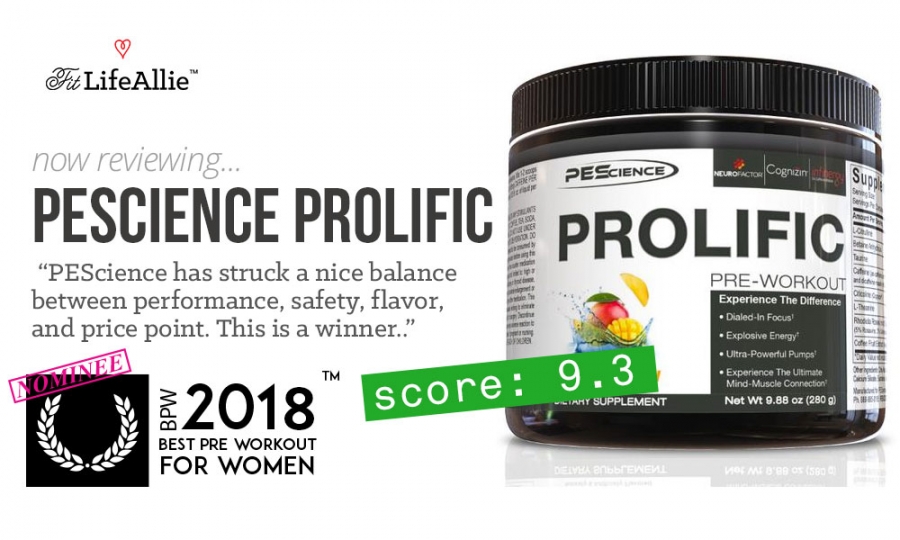 PEScience Prolific Reviews are easy enough to find on Bodybuilding.com and some other retail outlets, but you never really really get the FULL scoop until you come across MY thoughts here on the BPW. You guys know that I go into way more detail after trying out these pre workouts, so I’m going to take some time today to do a deep dive on the new PEScience pre workout. In this review, I’ll talk about flavors, the formulation, the effectiveness, and even the packaging in a what I think is going to be the best PEScience Prolific Review ever written. And by ‘I think’, I mean ‘I KNOW’. Wink wink. So why don’t we cut straight to the chase and begin the review.

PEScience is one of the brands that has been around for quite some time. We all know that. We see Amanda Bucci promoting them nonstop. And my experience with the brand has been quite varied. There are some PEScience products I have liked and some that I have not. I actually think the most comparable product to Prolific that I’ve tried was the ‘High Volume’ pump-focused product. That stuff was pretty good, but in my opinion not exceptional. I just don’t love those vaso-dilating pre workouts. But some of the flavors were okay, and people do seem to love Prolific pre workout on the old ‘gram, so I figured why not grab all five flavors and do a full rundown. And why don’t we start the review right there- with the flavors.

What is the Best Flavor of PEScience Prolific Pre Workout?

So there are five flavors of this pre workout, and I actually got to try all five of them at once thanks to the demo day they had going on at my gym. He legit had a shaker full of each flavor which was awesome because I just lined them up like five shots of Jameson, Lol! Here are my thoughts on each one:

Cotton Candy: I thought this flavor was sweet and tasty, although it did NOT taste all that much like Cotton Candy to me. It was more fruity in a way. I give it an 8.5.

Mango Splash: The Mango Splash Prolific flavor was very generic and didn’t quite do it for me. I think it also had a weird aftertaste that was a pretty bad turnoff. No good.

Melon Berry Twist: This flavor was QUITE good and unexpectedly so. I think PEScience got really creative and packed a ton of various fruit and berry flavors into one big punch bowl of a flavor. It’s bold and delicious!

Raspberry Lemonade: Raz Lemonade has been beaten to death and so while this flavor of Prolific Pre Workout IS good, it’s just not great. I’ll give it a B minus because I’m mostly just sick of this flavor.

Sunrise: This is a strange and vague name for a pre workout flavor but it’s definitely mango or peach or something like that. I think the flavor is sort of bland but it’s actually enjoyable. Not too tart and has a nice sweetness to it.

So those are all five flavors. Which one is my FAVORITE you ask? I would actually have to say the Melon Berry Twist. I don’t think most people would pick that one but it’s definitely the best flavor of PEScience Prolific. Here is how I would rank the five Prolific flavors from best to worst:

Overall though, all of these PEScience Prolific flavors are drinkable. None of them are ‘bad’ and the Melon Berry Twist really is grand. I’ll give this pre workout a cumulative score of 9/10 on flavor. It’s good. Let’s talk about the actual performance now.

Does PEScience Prolific Work? What Does it Feel Like?

I’ve spent a great deal of time talking about workout performance as it relates to pre workout because some of the pre workouts I’ve tried recently have been downright scary. Just way too strong. Pre workouts like MDRN Athlete which was my most recent pre workout review…or ones like Cass Martin’s WRKETHIC…or even that Myoblox Loco pre workout… these products just seem to be getting STRONGER and STRONGER.

I was hoping PEScience’s new Prolific pre workout would actually be a little bit less strong and be a more smooth experience that I could enjoy every day.

So I tried one scoop, (which is a pretty big 14 grams by the way), before a pretty standard leg and shoulder day.

The pre workout kicks in pretty quickly after you take it. I would say within 5 or 10 minutes I was REARING to go. I felt the caffeine kick in, but no beta-alanine tingles, which you usually get in pre workout.

The product started me off strong through a 6 set squat progression, ranging from low-weight, high-rep range sets down to some heavy sets of 3.

I felt good. I felt focused. And I felt strong. My energy was good and consistent, while my endurance was, well, what it always is I suppose.

I think Prolific is actually a really nice blend of energy, focus, and strength. I think it is better suited for weights and high intensity training. Probably less tailored for cardio, but who does cardio anyways. (Everyone including me, but who’s counting).

Overall Prolific gets the job done. I think the energy COULD be a little strong for a newcomer to the pre workout scene, but you could pick from the other 150 pre workouts that I’ve reviewed if that’s the case. I’m giving PEScience Prolific an 8.8/10 on the performance side of things. Let’s look at the supplement facts now and see what’s actually in PEScience Prolific pre workout.

The ingredient list in Prolific is pretty interesting. There is nothing ground-breaking in here, but I seriously think that’s a GOOD thing. Like I said, I’m a little bit nervous of all the crazy stimulants that the companies have been loading into their pre workouts as of late. I’ll list out the ingredients below and then we’ll have a look at some of my notes.

And so those are the ingredients. The thing you notice first are the stimulants, which are a standard combination of caffeine (regular and time-release), plus branded focus ingredient citicoline. There is also a special coffee fruit extract called ‘NeuroFactor’ in here that gives some extra punch to the focus. I do really like the ingredients. There is a HUGE dosage of citrulline in here too. 6 whole grams. Combined with the 2.5 grams of betaine, that’s where PEScience Prolific provides the boost in strength gains.

A few random other notes:

- PEScience Prolific does NOT contain any beta alanine. So no tingles.

- PEScience Prolific uses artificial flavors and sweeteners. Not surprising but interesting to note for my ‘all-natural’ crowd.

To summarize, I really did enjoy this pre workout and it’s because it does have a good solid formulation. It’s well made. Now let’s talk about the worst part of any PEScience product- the packaging.

As you know from my last PEScience review, which was on the underwhelming Vegan Protein powder, I have never been blown away by PEScience’s packaging game. I think most of their design looks tired, and fails to conjure much emotion to the consumer. Now. I know they aren’t in the emotion-conjuring business. They are in the performance supplement business. And that’s exactly what Prolific IS so it’s hard for me to really knock them for making the packaging more, eh, ‘clinical’ in a way.

But for me, I just don’t think it’s very aesthetically-pleasing. The traditional black PEScience jars provide a boring backdrop to the standard black and white, traditional PEScience designs. The name PROLIFIC sits in a dominant position across the front panel, while other information lies in the corners surrounding it.

The highlight of the PEScience Prolific label, graphically anyways, is the large flavor graphic that reveals the taste of the flavor within. They are big and prominent, but even they are not of adequate quality to change my perception of these labels of being a little cold and coarse. I will give PEScience a 7/10 on packaging.

- Melon Berry Twist is the best of the five flavors, but they are all decent. ‘Sunrise’ is a surprisingly adequate runner-up.

- The PEScience Prolific formula is thoughtful and composed. Nothing dangerous which I like

- Prolific performs quite nicely in the gym. Not much to speak of in terms of endurance but very nice strength and energy boost

- The Packaging is lousy, but PEScience has never blown us away on that front

I think this is the best PEScience product that I’ve tried. They’ve struck a nice balance between performance, safety, and price. For that reason I think PEScience Prolific has a real shot at pre workout of the year in 2018.*