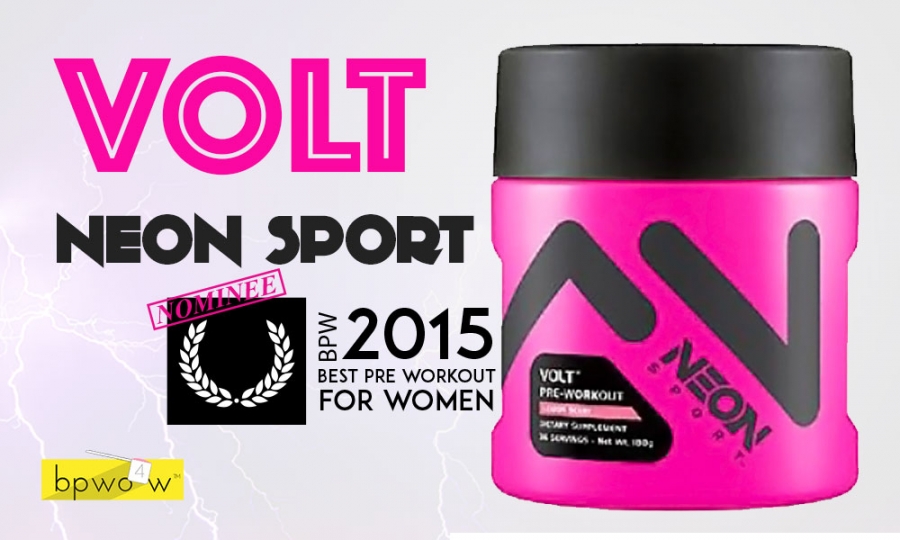 Today I’m FINALLY going to get around to my Neon Sport Volt review that I’ve been meaning to do forever and I’m so excited to include it as an official nominee for the BPW top ten pre workouts for women of 2015. Neon sport is a child offshoot brand of the super popular Cellucor family, the makers of C4 pre workout, which I’ve reviewed here on the site as well. Cellucor has been busy creating several new brands and rumor has it they are even going to release a women’s only line that I’m incredibly excited for. Anyways, there other brands include the Arnold Schwarzenegger series, the Royal Sport series, and also the topic of today’s focus- the Neon Sport line.

I’m a fan of the Neon Sport products because they are priced just a little more affordably than the classic Cellular Chrome Series. Neon sport has a pre workout, which is what I’m going to talk about today, as well as a fat burner, and also an amino acid product. But let’s focus on Volt. In this review, I’ll tell you about the taste, the performance, the formula, the packaging, and of course finish things off with a final score and value rating.

I got my tub of Neon Sport from supplements.com simply because it was, well, cheap. For only $26 bucks shipped, I got a full 36 serving tub. Now, a lot of you will take two scoops like I did, which makes it more of an 18 serving tub. Still, the cost per serving would still only be $1.44 - which isn’t too bad for a pre workout. Volt is priced even cheaper than Cellucor C4, I was curious how it would perform relative to the standard pre workout that we all know and love. I’ll start things off by telling you about the flavor.

I really enjoyed the taste of this pre workout. I got the blueberry pomegranate flavor because it was something different. I appreciate when brands go out of their way to try and bring something unique to the menu outside the standard pre workout flavors that we’re all sick of (i.e. fruit punch, blue raspberry, watermelon, etc.). The blueberry pomegranate flavor mixed a really nice dark purple color, and dissolved very evenly. Their was no clumping, and not even very much sediment once I got down to the last sip. The flavor itself was strong. Now keep in mind I took two scoops, so if you take one it won’t be quite as intense of an experience. The drink was very sour- more sour than sweet thats for sure. If I were naming the flavor I would have called it bitter blue berry pomegranate - and received a bonus for my alliteration LOL. But seriously. This flavor wasn’t the most ‘natural’ pre workout that I’ve ever tasted, which comes as no surprise since Neon Sport chose to go with artificial flavors and sweeteners. But they did a good job. You could definitely taste both blueberry and pomegranate notes, though like I mentioned it’s a bit like a sour candy taste. Which we all love. B plus in the flavor department. So Volt tastes good- but how does it perform?

Volt provides one of the most unusual pre workout experiences that I’ve ever had. I took my two scoops before a bodyweight workout in my building. There was crazy traffic today and I was in no mood to fight the traffic all the way into town. So I opted to use the gym in my apartment complex. Which, to be honest, is inadequate for my needs (hair flip), but today it would have to do. I finished up my pre workout and sauntered in. I opted for three simple things- the treadmill, the pull-up bar, and the kettle bells. I decided to do a super simple, quick, hard-hitting circuit of treadmill intervals, pull-ups, and kettle bell swings. The cadence was: half mile uphill run at 8.0 mph and a 4.0 incline (in itself, more than enough to get your heart running at full speed), followed by pull-ups to failure, and then a chin-up hold to failure. Finishing up with 50 kettle bell swings. And I’m almost getting light-headed even recalling the feeling after just my third time through the circuit. I ended up doing FIVE times through the circuit, and in large part thanks to Volt.

The first one was an incredible challenge. If you’re like me, the first few minutes of a hard workout, you feel like you’ve never ever worked out in your life until that moment. I think it must just take awhile for my blood vessels to fully open up or something. But in terms of the pre workout effects, you can definitely feel VOLT go to work straight away. This is primarily a caffeine plus beta-alanine formula, which we’ll go into more in the formula review section. But yeah, the BA kicks in super quick, and even harder than in C4. You get the tingles in the face and neck, and that’s when you know it’s time to get to work.

The second circuit I started to feel the endurance and dilation capabilities of this pre workout kick in. The third and fourth also went by almost easily. The music was jamming in my headphones (Bose Si2 if you need a recco), and I was practically fist-pumping while knocking out the half mile treadmill climb. I think I almost lost consciousness during the final set of kettle-bell swings, but that’s how you know you worked hard. Right? Nervous LOL. Ok. So Volt works unreal. But let me tell you my absolute favorite part of this pre workout. It’s the POST workout.

Call it exercise-induced endorphins. Call it placebo. But every time I have taken Volt, immediately after my workout I am literally elated. Yes, exercise does trigger your body to release hormones that make you happy- but Volt does something to accentuate this effect. I don’t even know what I was so happy about, but each time there was about a 45 minute window where my happiness levels were through the roof. If you try this pre workout you have to tweet me and let me know if you feel the same thing! Let’s see if we can spot and nootropics unique to Volt that might be the cause of this amazing effect.

WOW. Allison. You must be going soft. Nope. Neon Sport just gets props in my book because they dared to be different. Now, this isn’t necessarily a women’s specific pre workout, so they weren’t tempted to make the pink and black mistake that so many others have. Volt packaging is an interesting blend of futuristic and minimalist. It quite frankly looks like no other sports supplement I have ever seen before. And I say that in the best way possible. The yellow (or pink if you get the special edition) them with bold graphics and spartan text is completely refreshing to me. It’s not the most beautiful thing I’ve ever seen (see ATHENA for example), but it really is a breath of fresh air in a market where everything looks the exacts same. Props to the design team at Neon Sport.

I’m giving Neon Sport a totally respectable A minus because I just like this product for the price. Is it the most complete formula on the market? No. Neon Sport is basically an ‘economy’ line of supplements from Cellucor that in my opinion rivals its big brother (C4) in terms of both taste and performance. Since Volt gives me that great euphoria feeling, I’d actually be tempted to choose it over C4 if given the choice. I highly recommend this pre workout for men and women alike.