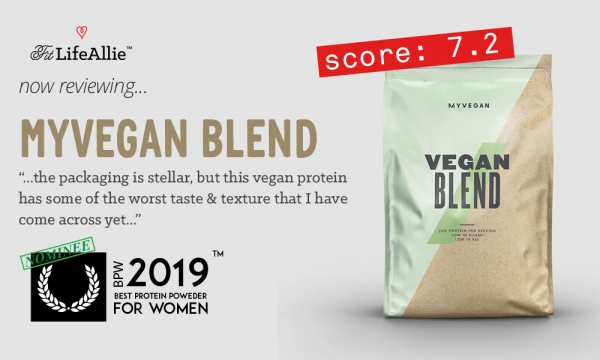 My MyProtein MyVegan Vegan Blend protein reviews have arrived and I am pretty pumped about it. I have not been blown away by the other two MyProtein Reviews here on the blog but I definitely came into this MyVegan review with a totally open mind. I grabbed a small sample bag of both the vanilla stevia and chocolate stevia flavors, and I’m so pumped to be able to finally tell you my thoughts on them. In this MyVegan review we’ll go over both flavors, the formulation, and even the packaging so that we can get a really good comprehensive look at the product from the inside out. I’ll sprinkle in my trademark humor and accessible tone so that you can actually understand what this is product is like without the fancy words that these companies like to use when describing their product. Sound like a plan? Okay then. Let’s get the Vegan Blend review started.

MyProtein is not my favorite company on earth but I certainly didn’t HATE the products of theirs that I’ve tried in the past (the MyPre Pre workout: full review here, and the myProtein Impact Whey: full review here), but again, I am always down to try new vegan products so when I saw that MyProtein launched an entirely new Vegan line of products I knew I wanted to get a read on it. They have all KINDS of new vegan products but obviously the flagship product to any of these lines is the protein, so, I scooped two bags and tore into them. Let’s start with a review of the MyVegan Vegan Blend taste.

MyVegan Taste is NOT Good.

MyVegan is a great name, and as we’ll talk about, the packaging is kind of neat too. But goodness gracious. This product tastes absolutely awful. Neither flavor appealed to me at all. Starting with the names. ‘Chocolate Stevia’ and ‘Vanilla Stevia’. Stevia in general tastes terrible so why on earth they NAMED their flavors with ‘stevia’ in them to begin with is just dumb.

The texture of this vegan protein is what really stuck out to me, in the wrong way. Let me tell you. I have had some terrible vegan proteins. I am no stranger to a classic vegan protein texture that is grainy and gritty and tastes like chalk. It’s not pleasant. I mean. It’s just odd that a company as big as MyVegan would be so atrocious with the product development on these.

Not only is the texture chalkier than almost any other protein I’ve ever had (and that’s saying something), but the flavors themselves are even bad. They are bitter, they are not nearly sweet enough, and they lack discernible flavors that would overcome some of the strong pea protein and bitter stevia flavors. It’s ironic. It’s almost like the ‘stevia’ flavor is part of the actual favor of each product. It’s super bitter and super prominent in both the chocolate and vanilla MyVegan Vegan Blend flavors.

If I absolutely HAD to pick a favorite flavor between these two, I would probably say that the chocolate stevia flavor of MyProtein Vegan protein is the best flavor. The vanilla is just truly bad. It really lacks vanilla flavors that you would expect in a ‘vanilla’ flavored product. The chocolate stevia flavor is not GOOD by any means but at least since the chocolate is a stronger flavor, it somewhat balances out the earthiness and bitterness of the ingredients.

Speaking of ingredients, let’s look at exactly WHAT is in this vegan protein blend.

I often judge these proteins not just on taste, but by what’s on the inside. The plant-based proteins all have strong-tasting proteins so most times I have low expectations for what they will taste like. And that means the ingredients become more important- you know? Like. If they are going to taste lousy anyways, why not just focus on the nutrient density and nutritional value.

I actually have reviewed two really cool plant-based vegan proteins lately that had not just the basic proteins but some superfoods to add additional health benefits as well and make them more complete. You can check out those product reviews here, and here.

Anyways. MyVegan Vegan Blend is NOT one of those cool well-rounded ones. It DOES contain some probiotics and some digestive enzymes, but it is lacking any greens or functional superfoods that help distinguish it from the competition. Let’s look at what IS in here though:

NOTES: So like I said- you don’t have all that much going on in here. Many of the line items here are for flavor and texture (they did NOT nail the texture ones because it still has AWFUL texture LOL). The protein sources in MyProtein MyVegan Vegan Blend, as you would expect, are pea protein and brown rice protein. And then you see the enzymes and probiotics. At least they did use a good quality probiotic which is a silver lining and probably the first nice thing that I’ve said about this protein powder yet.

But hey, now that we are speaking complimentarily, let’s sing some packaging praises, because MyProtein has FINALLY cranked out a nice-looking product.

MyProtein MyVegan Packaging is the Only Highlight Here...

Maybe that’s harsh, but the fact of the matter is there are a LOT of really good vegan proteins on the market today. You can see that I’ve reviewed almost all of them in my vegan protein reviews section, and although this one did not quite hold up as far as flavoring or formulation, it actually is one of the best-looking vegan proteins that I have seen yet. I love the half-kraft, half-pea-green glossy looking design. It is actually pretty brilliant, even if the paper look is faked (it’s just plastic printed with paper texture.

The diagonal theme is one that is prevalent throughout the entire line and it does create a really nice consistent look for their vegan products, which often look terrible.

So while I don’t love the flavors or care all that much for the MyVegan Vegan Blend formula, I do think that MyProtein has done a great job walking that thin, delicate line on authenticity and tastefulness in their vegan packaging.

So where does that leave us for final thoughts? Let’s review what we’ve learned…

-MyVegan protein tastes SUPER bad, and the texture is not good. Neither flavor impressed, but if I had to pick one, it would be the chocolate stevia flavor

-MyVegan Vegan Blend features a relatively simple formula devoid of very much imagination. It does include a premium probiotic which is the only highlight

-Vegan Blend packaging is nicely composed and reflects carefully planned design elements. The execution could be better with higher quality materials, but the overall optics are fantastic regardless

The bottom line? MyProtein has made, in my opinion, a good-looking, bad-tasting, average product. The prices are not unfair, but since the taste is so bad, it just will never find a spot in my regular rotation. Better vegan options exist.