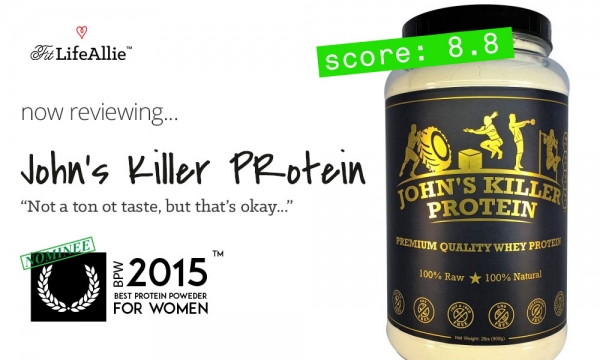 John’s Killer protein is easily one of the most fun products I’ve reviewed on the blog here. In this John’s Killer Protein Review, I’m going to tell you why I’m smiling from ear to ear every time I see this tub of protein powder on my kitchen counter. I’ll tell you all about the flavor, the formula, the packaging, and much more in this comprehensive protein powder review. I’ve tried their plain whey protein powder, and also their Organic Cacao flavored version, and I plan on telling you ALL about it. So if you’re ready for one KILLER protein review, let’s get it poppin’!

I was so curious to try John’s Killer Protein from the very first time I saw it on my Instagram feed. At first I thought it was some kind of joke because the packaging is really hysterical. And actually why don’t we just start right there with the packaging because it is so fun!

But not really in the usual ways that you are used to seeing these sports supplements. Most of them have a sort of standard ‘tech-ey’ vibe to them that is, well, probably good for sales, but also a bit of a turn off after a certain point. But John’s Killer Protein goes a TOTAL different direction with their protein powder packaging. I should say that some do go unique, such as Luxe Protein, but theirs just looks like granite or something. It didn’t make alot of sense to me. John’s Killer Protein has a totally different sort of ‘Old School Olympics’ or ‘Gym Class’ vibe that I’m totally loving. From the moment I saw this brand on Instagram I trusted it immediately. And I don’t even KNOW who John is. John could be a complete shady dude but for some reason, I just don’t think he is is. I TRUST John and his killer protein. I mean. Just look at this gorgeous bottle! I’m staring at the Cacao one right now and I’m obsessed. The brown and gold is just striking, in a subtle, awesome way. The ‘olympics’ style borders and graphics make me smile every time. There is a tire flipper, a box jumper, and a kettle bell guy. And then a cross-fitter swinging her way up a pull up bar. It’s just awesome! I would be willing to be that John from John’s Killer Protein is a crossfit enthusiast. Maybe he even owns his own gym. I think he has a fantastic brand going here. It will be interesting to see if he really goes for it and tries to make John’s Killer Protein a real company or not. Because I think he could. The products are fantastic. Let me tell you why.

CLEAN is the big buzzword of the crossfit community. They all love to eat their ‘clean’ chicken and veggie meals. And their ‘clean’ bacon and eggs. And almonds and all that jazz. Non-GMO, paleo, organic, cage-free… the whole nine yards. If you know a crossfitter, then you know what I’m talking about. They talk your EAR off about it. John’s Killer Protein is clearly crafted in that image and likeness. My favorite version of John’s Killer Protein is the Cacao Blend- which is literally only TWO ingredients. That might be a world record for minimalism. And believe me, in this day and age, minimalism is a big trend. Look at Progenex, Clutch Bodyshop, LDNM, NKD Whey, Ascent Native Whey…there are a TON of companies going with that modern ‘less is more attitude’. But none have taken it to this extreme. I mean. 2 ingredients. And the other product, the John’s Killer Protein Premium Whey Protein, is just ONE ingredient, and that is the Whey Protein Concentrate. I think they could’ve used an isolate, which would be an even higher quality protein, but overall, I have to give them an ‘A’ on formulation because, really, what more could you want from a purity standpoint? It's MUCH better than having a 'clean' look, but then just being a terrible product inside, like that horrible Cute Nutrition stuff I reviewed yesterday. Now. It’s time for the hard part, and that is the flavor.

And here’s the achilles heel (going with this ‘Olympic’ ‘Greek’ thing!) of all these super clean protein powders. They are all just lacking in taste. I know the John’s Killer protein is not such a great protein powder in terms of having something that you can put in your shake at night time, and feel like you are drinking a McDoanlds Milkshake. No. This is just NOT that style of product. This is the protein that you have to really put into a shake with some other things to flavor it. And so when I tried out the Cacao and Protein version, yes it had some chocolate flavor, but it’s really not very sweet or flavorful. In that sense it sort of just tastes, well, home-made to an extent.

That being said, when I ADDED a few goodies to John’s Killer Protein, it transformed it entirely into a really delicious and wholesome tasting shake. I added banana and some regular old JIF peanut butter, which both have some sweetness to them. And WOW was that a masterpiece. Especially when I used some Organic Whole Milk in it. This shake was an exceptional accomplishment in the realm of my kitchen masterpieces. Lol. John’s Killer Protein was amazing when mixed into various creations. For example, when I used the regular Whey (not the chocolate one), in combination with some raspberries, blueberries, and a splash of maple syrup. Gosh dang was THAT a delicious treat. And so that’s really how you have to think of the flavor of this protein. On it’s OWN, it’s a B minus, or worse, because it literally doesn’t taste like anything. But mixed into some different combination shakes, it’s fabulous.

All in all, I’m a fan of John’s Killer Protein, and not even just from a product standpoint but more so from a brand standpoint. I just trust what they are giving me. I think for products as simple as they are, they might be a TOUCH over-priced, but that’s just kind of the way it has to be as, what I imagine, is a very small little company. But I do think John’s Killer Protein is worth a shot.*