I Eat Protein Coffee Review: I'll Take a Starbucks Instead. 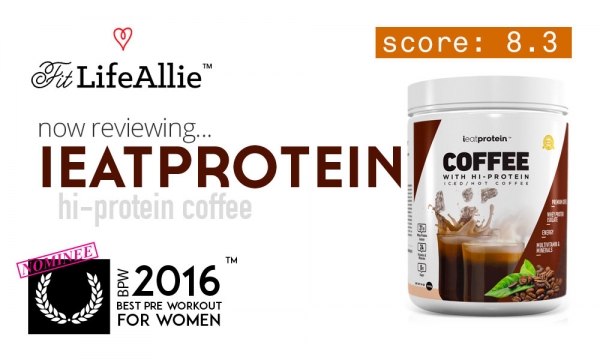 Protein. Coffee. These are a few of my favorite things. But what do you do when these things seem to not mix so well? You could do what normal people do, which is eat food that has protein in it, and then drink your Starbucks like a normal human being. Or. You could go a little off the beaten path like ieatprotein and make coffee with hi-protein. In this review I’m going to talk a little bit about IeatProtein protein coffee and by a little, I mean a lot. I’m actually going to tell you literally everything and anything you could ever want to know about this protein coffee. Everything from the flavors to the formula, to the label will be flushed out in excruciating detail. Well. It won’t be excruciating. Instead it will probably be entertaining. Since I’m the best supplement reviewer in the world and i have some energy for this protein coffee review since I just drank some. Woo! Lol. Let’s quit the small talk and jump right into bed together. Welcome to this ieatprotein coffee review.

I’ve only tried one other variation of protein coffee in my life before, and it was pretty repulsive. My fit friend Alana made me some of his ‘favorite’ beverages that combined a protein powder and a venti Starbucks blonde roast. It sounded good. And it smelled ok, but oh boy was it bad. It tasted like drinking a thick ashtray. I don’t know that I’ve ever drank ash, but Alan’s special protein Starbucks HAS to be what it’s like. I was hoping that this product from ieatprotein was not going to be that way. I eat Protein makes some of those powdered peanut butter products, and they have a big Instagram game going on. I have never been one of the types to go for powdered peanut butter but I did get my hands on some of the FitMix (that’s what they call it), and I did do a full review on it which you can read here. I didn’t like it very much. So long story short, I was hoping that I would like the ieatprotein coffee much more than I liked the fitmix powdered peanut butter. So. Did I?

It tastes like dirt. Or clay. Or bitter, thick, awful coffee. I mean. I did not really like it very much at all. It smells really good, and then you scoop out a scoop into your hot water (or cold to make iced), and mix her all up and honestly the result is something that is not very pleasant at all. It’s another case of ‘oh protein coffee sounds good, let’s try that’, and then you get it and it’s absolutely foul. I really am not a fan of ieatprotein protein coffee in terms of the taste. It’s not really a matter of something that they did wrong, I think it’s just a product of protein and coffee not being very good matches for each other. Protein is naturally much thicker than coffee, and when you put it into a hot liquid I don’t like the way it tastes. Or the ‘whey’ it tastes I should say, since this product uses whey.

The flavor itself IS definitely a coffee flavor, I admit I was being a tiny bit dramatic when I told you it tasted like clay. It does taste like coffee, sort of. But not good coffee. I think that’s part of my problem. I am used to really good coffee. Like pour over, Blue Bottle isht. That’s what happens when you live in San Francisco for four years, people. You get to know GOOD coffee and anything else pales in comparison. But yeah. This stuff tastes exactly like thick, bad coffee with hot dissolved whey protein in it. I think you’re better off just making your own concoction because this one isn’t good. It also uses artificial sweetener, which I could do without. Let’s talk more about the ingredients though.

So the only cool thing about this product is the micronutrient formula that they added to it. Micronutrients means vitamins, by the way. Lol. And by cool, I mean it’s cool if your diet isn’t all that great and you have yourself a vitamin deficiency. This product contains a big range of vitamins and minerals which, while I don’t necessarily need them, I can see the draw of them, and why they are included. I’m guessing that IEatProtein included all of that stuff because they anticipate most folks using this as their whole breakfast. Since that is the case, they wanted to be able to say ‘hey look, this is an entire meal right here!’. Now. To me, and probably some of you, that’s just plain old BS. There are no vitamins and minerals in here that are anywhere near as valuable as what you would get from good old fashioned food. So that’s where I stand on the vitamin question. But let’s look really quick at the main ingredients in IeatProtein coffee:

My first reaction is, why do you need artificial flavors in protein coffee. I mean. It already has coffee in it, and whey protein is very neutral if not pleasant tasting as is- so what gives? I don’t need anything more artificial in my life- especially with artificial intelligence well on it’s way to play a large role in all of our lives.

Here’s another thing to pick at- they say they use ‘premium’ coffee. People. Believe me when I say. I KNOW premium coffee. Ieatprotein coffee is NOT premium. I’d be willing to bet my bottom dollar that it is actually quite the opposite, from some super low-grade place. It’s not good coffee. Period. And then lastly, as I said earlier, I don’t like that they used artificial sweetener in ieatprotein coffee. I’m really trying to limit the artificial stuff so this wouldn’t help me in that case.

Super average. The product doesn’t have anything too great going for it on the inside (just like me ex), and I suppose the exterior IS just a bit better than the product itself. Which means the packaging is average, since I really do not like the product itself. I don’t really know what they should have done to make it better, but I just don’t like the overall aesthetic. It looks like a technology package. The fonts are too metro, and the colors lack imagination.

I do like the ‘coffee’ graphics where they are showing that you can drink it hot or cold. That’s smart from a marketing standpoint. But design is so much more than marketing logic. The biggest thing that this product does not have is soul and life. I bet some people sitting around a boardroom table thought this was such a smart and clever design. Those are not the right words for it in my opinion. It’s all just too conventional and basic for me.

I mean. Taste is the biggest factor at play for me. Ieatprotein is not the right protein coffee for me because I don’t think they spent enough time making a product that you want to give up your regular coffee for. It’s not a success, guys. Ieatprotein coffee doesn’t pass the test for me.*