Ground-Based 'Superfood Protein' is OK, but has a few flaws. 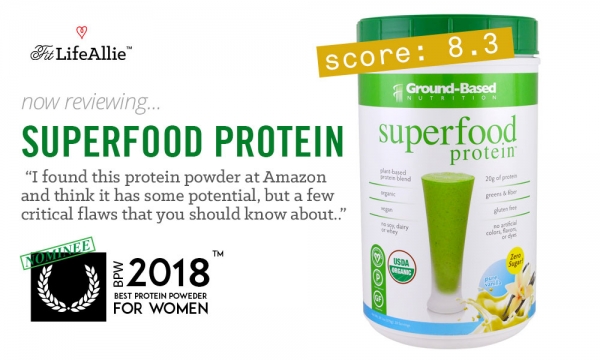 Ground-Based Nutrition Superfood Protein Reviews are coming to you RIGHT NOW and I’m so happy to let you in on my thoughts in yet another vegan protein powder review. In this review we’re going to discuss all key topics relating to the Ground-Based Nutrition Superfood product. The first, and of particular importance is regarding taste. What does this protein powder taste like? What are the best flavors? The BEST flavor? I’ll tell you this. I’ll also tell you what the worst flavor is. I’ll tell you what ingredients are in Superfood protein as well. After all, you should know what ‘superfoods’ are really in here, and what they are actually going to do for you. The final thing we’ll discuss in our review is of course packaging. Is this product a looker or a Quazimodo (who remembers that name?!) Lol. Okay. Hunchbacks aside, let’s begin the discussion on Ground Based Nutrition’s Superfood protein.

I found Ground Based Nutrition Superfood protein at my home away from home. AKA Whole Foods. A place I frequent more often than I care to admit. Certainly more often than my pocketbook would like me to. But there was actually a demo table set up there and I really was thirsty for a shake at the time I saw it.

I walked up, and just by taking a look at the label I knew I wanted to give Superfood Protein a shot. Why not. The product looked enticing and I hadn’t done a new Vegan protein review in quite some time. So I bought one tub of each flavor, made my daily stop by the hot bar, and went on my merry way.

I got home and set about trying each flavor of Ground-Based Nutrition Superfood Protein. Here are my thoughts on which flavor is the best option.

I find the unflavored option to be really interesting because I’ve always been curious to find a great unflavored vegan protein powder that I can use to make my own shakes at home. I used this product a couple of times and I won’t consider it in my flavor rating because honestly it tastes like, well, pea protein. It has that classic ‘vegan protein’ flavor that we have become so familiar with.

Between the 'Rich Chocolate' and 'Pure Vanilla' Superfood Protein though, which one is the best? That’s a FANTASTIC question, and one that I want to spend some time on now. Here are my thoughts on each:

Rich Chocolate: The chocolate flavor of Ground-Based Nutrition Superfood Protein is very average. It’s not the best Vegan protein I’ve ever had, but at the same time it is not the worst. I do like that the chocolate has some noticeable CHOCOLATE taste that many others don’t. I know it sounds crazy but you would be surprised how many of these Vegan protein powders are ‘supposed’ to taste like chocolate and then they just end up tasting like plants, or like nothing. I don’t understand why that is, but I just think it’s good that Ground-Based’s chocolate Vegan protein actually has some real flavors in it. Ok. What else. This protein powder has some weaknesses to, don’t get me wrong. There needs to be much more sweetness in the chocolate flavor. It does have good chocolate-ey-ness if you will, but it’s just not nearly sweet enough. I would give the chocolate flavor of Superfood protein a 7/10. Very average.

Pure Vanilla: The Vanilla flavor of Ground-Based Nutrition Superfood Protein is also quite average. It’s interesting. Most times I am able to come up with a clear winner and a clear loser when it comes to the flavors of these protein powders. But with Ground-Based’s vanilla flavor, it’s also a 7/10. The vanilla flavor is not quite as prominent as the chocolate flavor is in it’s respective flavor, but then unlike the chocolate, the vanilla flavor actually DOES have a decent bit of sweetness in it. These two protein powders are just very different in that regard. I do like that the vanilla is sweeter, but I wish it had more depth of flavor.

So. Which one is BETTER? That’s really such a tossup but if I had to close my eyes and pick just ONE I would say that the vanilla is the best flavor of Ground-Based Nutrition Superfood Protein. Again, it’s just because sweetness is so important to me and my crazy sweet tooth. I just need to have that sweet element or else that protein powder is not going to be a winner in my book. Ok. So we’ve got the flavor taken care of. Why don’t we spend a few minutes talking about what is IN this protein powder.

The ingredients in Ground-Based Nutrition Superfood Protein are very interesting. There is more going on in this protein powder than meets the eye. Let me list everything out, and then we’ll dive into what the pros and cons of this protein powder are.

And so there you have it- quite a laundry list in this Ground-Based Superfood protein. But that’s the thing- this is technically called a ‘Superfood’ Protein, so you would expect there to be a few extra things in here than just the basic protein ingredients themselves, right? Of course.

Let me start by chit-chatting about the protein sources themselves. I think that despite using a blend of four different Vegan proteins, Ground-Based has most likely used a GREAT deal of pea protein in this formula. I also think that the brown rice protein is most likely dosed out quite generously, because those are the two proteins that have very distinctive flavors, both of which are quite prominent on the palette when I drink it. As far as quality, I think that the Ground-Based proteins are very much in line with the quality of almost every other protein out there. Pea and brown rice are standard, nothing more. Ok. Let’s talk about the Superfood element of this shake.

All of the superfoods in here sound great. Broccoli, Spinach, Kale, Maca. Even coconut oil powder. I mean. Those are all fantastically healthy foods. But here’s my problem. Because Ground-Based Nutrition Superfood Protein has a completely proprietary formula, we have no idea how much of ingredient is on this label. We just don’t. And that’s a problem, because there is no way of knowing if there are actually enough superfoods in here to be effective and actually make a different in our health, or if they are simply sprinkled in, in minimal quantities in order to list them on the label and use them for marketing. It’s just really a toss-up and frankly it makes me a little skeptical of the Ground-Based Nutrition Protein overall.

To summarize, the formula is just fine. The macros, which we didn’t even touch on, are very standard for a Vegan protein. There are 110 calories per serving, 20g of protein per serving, and not much else to speak of. I’ll give them an 8/10 on the formula because while I do like the ingredients, it’s hard to know how much of them there are, so that’s a big negative for me. Ok. Let’s talk packaging.

Ground-Based Nutrition Superfood Packaging Reminds me of something…

And that something is Shakeology. Remember, Shakeology is the KING of protein powder drinks, particularly these sort of ‘all-in-one’ themed ones. Ground-Based Nutrition Superfood Protein reminds me of that one in that it’s main graphic is that splashing liquified shake. I think it’s a good way to go about things, I really do, it just makes me sort of grin because they blatantly took a lot of inspiration from Shakeology. But anyways. Yeah I don’t have a problem with the packaging. It looks fine. It looks very comfortable and in the right place on the Whole Foods shelf. Green lid. White theme. Lots of green icons and callouts about how healthy it is. A very prominent USDA Organic logo slapped right on the front, along with some silly badge about it being the best. That little badge makes me a little skeptical again of Ground-Based Nutrition because it’s meant to look like some sort of official third party credential but the reality is, it’s just something they created to, well, sort of trick us into thinking it’s a third-party merit award. I’ll give them an 8/10 on packaging because it’s fundamentally very well designed to sell a lot of product, like Shakeology. OK. Let’s wrap this Ground-Based Nutrition Superfood Protein review up, shall we?

Ground-Based Nutrition Superfood Protein is a pretty good product for the price. If the the flavors were just a LITTLE bit better, and the formula was presented a little more honestly, I would say Superfood Protein would have gotten up into the ‘A’ range. But in my opinion in does have some flaws that keep it from being truly a favorite of mine.*