Ghost Vegan Review: Does it Have a Dirty Little Secret? 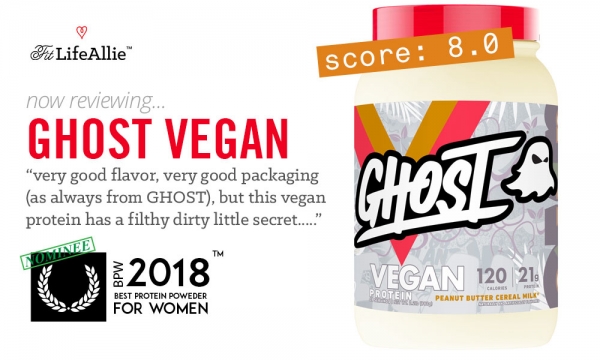 Ghost Vegan Protein Reviews are easy to find on Instagram and Youtube but I have finally decided to put it under the microscope and give it a full BPW review. In this Ghost Vegan review I’m going to tell you what is IN this Ghost Vegan protein, what it tastes like, and ultimately if it’s worth a try. You are probably going to be surprised when I tell you exactly what is in this new vegan protein powder so be sure to pay close attention to my ingredients overview. Let’s see. What else. Oh! Packaging. As always I will include a packaging review to let you know my thoughts on Ghost’s newest creation from an aesthetic standpoint. Sound good? I Think so too. Let’s begin.

Ghost Lifestyle, as you know, is one of my favorite supplement companies. Their original Ghost whey protein is one of top ten protein powders because of it’s excellent taste, solid ingredient profile, and of course it’s neat looking graphics.

Recently, the Ghost brand has released two super cool new products to the world. The first is actually a candy-flavored amino acid product. I know, you’re thinking ‘what is so new about that?’ After all companies have been making candy-flavored products for years now. But Ghost actually COLLABED with the Swedish Fish company to create actual Swedish Fish flavored amino. I haven’t tried it yet but it sounds cool right?

Anyways that’s not what we’re here for today. Today we’re going to go over my experience with Ghost’s SECOND big launch, which was this Ghost Vegan Protein. This is Ghost’s very FIRST Vegan product, and it’s pretty cool that I finally have the chance to give you the rundown. While it’s on my mind, why don’t we talk about taste first.

For a vegan protein. Always keep that footnote in mind. FOR a VEGAN protein. This protein powder would not hold up against my top dairy proteins. But against other vegan proteins, this one does kick but. The flavor that I tried, and apparently the only flavor that they currently have, is called ‘Peanut Butter Cereal Milk’, which I think is an odd name considering that Vegans can’t drink cereal milk. Well. I suppose they can drink almond cereal milk but it’s still sort of funny to me.

The flavor tastes to me like, him. Almost a little bit like a spiced cereal milk. I do taste some peanut, and actually one thing to note is that this Ghost Vegan product DOES contain peanuts, along with some other pretty questionable ingredients but we’ll talk about that in a second. This flavor starts off as a sweet peanut butter flavor and then at the end, you do start to taste some of those ‘vegan’ notes come through at the end. It is not completely unpleasant, but it is still fairly noticeable.

The texture is smooth, but again I would not compare it to any dairy-based products. It still does have a sort of grain-y-ness that tells you for sure ‘yes, this is definitely vegan’. But overall I will give the Ghost Vegan protein an 8.5/10 on flavor- it is darn good. For a Vegan protein. Okay let’s talk about the elephant in the room, the Ghost Vegan ingredients.

Okay let’s take it from the top. What do the macros look like? They are actually pretty standard. You have 120 calories, 21 grams of protein, virtually no fats, and a total of 6 grams of carbs, 1g of them being from fiber. I would like to see a little bit more fiber in here, but overall these macros aren’t so bad.

Let’s talk a little bit about the ingredients. And let me just say- I have read through a LOT of vegan protein ingredient lists in my day and this one STARTED to look very much like all of the others. And then something caught my eye. You know what that is? I’ll let the drama build while we talk about the other ingredients that are astonishing to me.

The Ghost Vegan Protein ingredients are listed in order of included in the highest quantities to the least. So first on the label is pea protein concentrate, followed by organic pumpkin protein, and watermelon seed protein. Those are the three main protein sources, and I don’t have a problem there. They tell you that it’s 80% pea, which, well, I guess is okay by me but I think it would be better with a more even balance. Pea is the best tasting protein though and the cheapest so that’s why Ghost uses primarily the pea.

Immediately after the three proteins are listed, you have all of the FLAVORING ingredients, and that’s where things get really ugly. Check this out. You have Natural and ARTIFICIAL flavors, peanut flour, sunflower creamer that contains tapioca, sunflower oil, starch, and other flavorings. And then you have salt, SUCRALOSE, and xanthan gum to round out the ingredients.

So. Do YOU see what I see? Artificial flavors and artificial sweeteners in a vegan protein powder. Uh. WHAT? How? What are they thinking? Why are you going to make a clean vegan protein powder and then just ruin it with artificial flavors and sweeteners?? I mean. Is it really worth it to make it taste just a TINY bit better? There are plenty of ways that Ghost could’ve sweetened and flavored this thing naturally to make it actually a clean protein but apparently that was not important to them. I just can’t believe that they did this. It literally makes it incompatible for like every vegan I know. Not to mention it’s just irresponsible in this day and age to use artificial ingredients. Shame on Ghost, IMO! I will give them a 7/10 on their formulation because of those harmful sweeteners and flavoring ingredients. Anyways, let’s try and end on a high note.

Ghost Packaging is fantastic, as usual.

Okay guys I’m MAD at Ghost! I’m mad that they compromised their Vegan protein powder with artificial ingredients. But as a saving grace, at least they did make their vegan protein powder look good. This Ghost Vegan protein looks like a classic Ghost product but has a unique look that sets it apart. I do love how each ghost product has some slightly unique elements that make it stand out from the other products in their lineup. Their Ghost Vegan label features the iconic Ghost ‘graffiti’ theme with the vegan edition sporting a gray background with ‘floral’ type graphics. I am a huge fan of Ghost and their many designs, but I have to admit that I actually am not so crazy about this label. It seems like the urban Ghost design language just doesn’t translate well to the natural/wholesome vegan theme. And ironically, that is what is reflected on the inside as well. The artificial ingredients are a staple of Ghost’s way of product design, and unfortunately, it completely tarnishes their Vegan protein. I give it an 8.2/10 on packaging.

-The product tastes delicious. Very peanut buttery, but with of course a tiny bit of a ‘vegan-y’ aftertaste

-Ghost Vegan Protein has a unique gray graffiti theme label and classic Ghost branding. It is sharp but probably my least favorite Ghost design to date

So. Where does all of this leave us? It really depends. If you are like me, when you purchase a Vegan protein you both expect and WANT it to be 100% natural. When it is not, it is surprising in the worst way. This Ghost Vegan protein is somewhat of a wolf in sheep’s clothing from that perspective that you expect one thing, and get another. It does taste (and look) good, but for me, that is not enough to overcome it’s dark secret. I love Ghost, but I do not love the Ghost Vegan protein.*