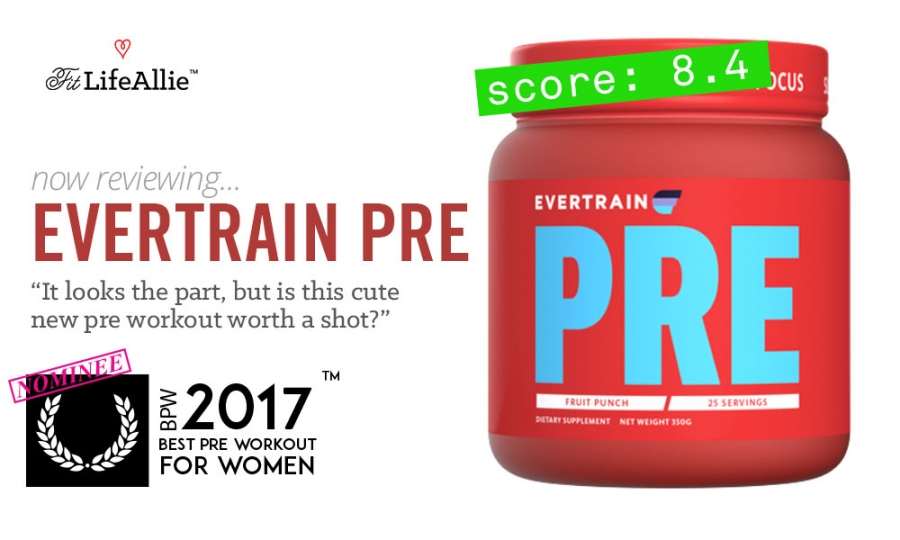 Evertrain PRE pre workout is one of the newest pre workout supplement I've seen on the market to actually catch my eye and so you KNOW I had to get my hands on it for an official Evertrain PRE review! In this Evertrain review I'm going to talk a great deal about if this pre workout actually works, and if it could possibly snag a spot in my upcoming top ten pre workouts for 2018. I know. Can you believe this is going to be my FIFTH top ten list? It's literally crazy. I can't believe it. But yeah this will be a fabulous review because I have a lot to say about Evertrain as a brand and particularly about this product. So let's get started on this Evertrain PRE Review!

Evertrain caught my eye first and foremost because of it's rather distinctive color combination and branding. I found them on Instagram actually when I was going through my discover feed and I saw a reddish tub of something just jumping off the page. Lo and behold it was the Evertrain pre workout jar. I'm actually going to start with the packaging.

Evertrain Packaging is Quite Good!

You guys know I am really hard to please when it comes to the appearance of these products, so when one of them REALLY catches my eye, it means somewhere a package designer should be patting him or herself on the back for a job well done. And that's what Evertrain is- a job quite well done, aesthetically speaking at least. The red hue used as the feature color on this product is both unique and attention-grabbing. I didn't like the name 'PRE' at first just because it's rather boring, but even that has grown on me. The packaging overall will get a 9/10 because the information is well organized, and tells me everything I need to know about this product. Speaking of information, let's move a layer deeper into the Nutrition Facts in Evertrain PRE.

Evertrain did a nice job on the exterior, but what's under the hood of this fancy new pre workout drink? I'll tell you, and then go over some of my personal comments on if that combination of ingredients is good, bad, or otherwise.

And there you have it. Quite a familiar list of ingredients that I think we're going to only  see more and more of heading into 2018. I think the combination of Caffeine, Creatine, and Beta-Alanine is very 2010, but the addition of some newer ingredients in Evertrain PRE, like ElevATP and theanine make it a more progressive ingredient profile.

Some things I don't love about it are the hordenine, which has never really been my favorite, and also creatine monohydrate, which makes me bloat. Yes, you've heard that gripe a million times, and guess what? Because it's true. And there are 3 whole grams of it in here too. You're GOING to fill up a bit wth water and look less lean. I don't love that feeling even granted the strength benefits. But let's actually get more into the performance.

So we've talked ingredients and packaging- but the most important element to any pre workout is functionality. I have taken Evertrain PRE about four times now, and I can tell you that there are pros and cons to this pre workout supplement.

I used to be very very VERY used to pre workout supplements. I would use them daily, for every single workout. I would feel great, every time. But more recently I've scaled back in my old age. I think the constant intake of caffeine quite frankly caused me to adjust to fast to their effects.

The reason I'm telling you all this is, I hadn't taken a pre workout for about three weeks leading up to taking Evertrain PRE. I was not ready therefore, for the punch that it gave. I think it was the hordenine that really provided the 'pop', but I have to say it was just to much for me. I know. Me. Allie Lewis. Former QUEEN of the STIMULANTS. What has happened? I don't even know. But this pre workout from Evertrain had me buzzing like a bee, to the point of pure jittery-ness. It felt awful. My heart rate got up too high. I needed to let it wear down a little bit before I even dove into my pre workout.

Once I did settle down a little bit, I think Evertrain did actually do some good things for me. I did feel stronger for certain, and my usual weights were ever so slightly more cooperative as I moved them in the proper direction.

The endurance WAS there, but not quite as purposefully as in other pre workouts. It could have been because of how long I did wait to actually start my workout. But. Maybe some more testing would be needed to REALLY gauge Evertrain PRE on endurance. The other aspect would be the pump, and I think there is an average pump element to this pre workout. Not as strong as some that I have tried, but not the weakest either.

Overall I have to give the Evertrain PRE pre workout a B on performance. I think they need to re-visit the balance of stimulants to performance enhancing ingredients, and likely get rid of that hordenine. Based on my experience with Evertrain PRE, folks will get on just fine without that stuff and still have plenty of fire under their behind. But. Let's now discuss the flavors of the Evertrain PRE.

What is the Best Flavor of Evertrain PRE?

There are three flavors of Evertrain pre workout, and I actually got to try all three because I made Sarah and Deirdre buy some of this stuff as well. I chose the fruit punch because I'm basic and have no guts to try anything new. My friends got the Tart Raspberry and Orange flavors so that we had all three flavors of Evertrain PRE covered. Here is how we agreed they should be ranked from best to worst:

The three flavors were all suitably sweet, and all had a comparable amount of acid or bite to them. The things that I thought set them apart were the actual fruit flavors themselves. There was so much more of a real raspberry flavor to the raspberry flavor than the fruit had of fruit punch, and than the orange had of the orange. It was as if they just put more of the flavoring into that flavor.

That being said, none of these three flavors were 'bad' and all of them would actually be kind of good in a rotation like I will do to keep using them. That way I won't get bored of the raspberry. Oh and there's one last thing about the flavor and that's that it does contain sucralose which is an artificial sweetener. Evertrain would have you believe they are very uptight about 'no artificial' but there you have the most popular artificial sweetener present in all three. I don't personally have a problem with sucralose but it's just kind of an eyebrow raise in the direction of the Evertrain brand.

I really did enjoy reviewing the Evertrain PRE, and I'll most likely review several more of their products because it looks like a brand that is poised to breakthrough. They clearly have a good head start on their products and it'll be fun to watch them as they grow to prominence.*