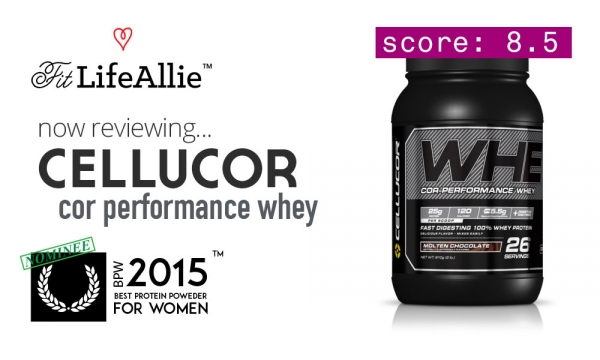 This Cellucor Protein Review is probably going to blow your mind. I’ll give you the FULL scoop on their popular Cor-Performance Whey, and provide you more knowledge on this protein powder than anyone else in the entire internet. I may even break the internet with this Cellucor Cor-Performance review. How’s that for a confident statement? Lol. Can you tell I’ve had too much caffeine already today? Like way too much. But that’s ok. Caffeine is your friend. So. In this Cellucor protein review, I’m going to divide things up into three main sections. The FIRST section will deal with the flavors. I had the chance to try three different flavors of Cellucor Cor Whey and I’ll tell you which is the best flavor. The SECOND part of this review will focus on the formula and ingredients. I’ll tell you what I like and what I don’t like about this protein powder. The last section will deal with packaging and appearance- my favorite part, lol. This is the part where we’ll really dig into some Cellucor design language. It’ll be fun. The whole review will be fun! And at the very end, I’ll tie it all together in one comprehensive review summary. Sound good? Sure does. Let’s dive in and get started.

Cellucor Cor-Performance Whey has to be pretty good, I thought to myself as I looked over my shoulder and changed lanes. I was on my way home from my local GNC, and, as usual, I had let the gentleman working there talk me into another supplement purchasing decision. I should probably start thinking about how to stand up for myself and make my own decisions so that I’m not always just buying stuff like Cellucor Cor-Performance Whey when my INTENT is to buy something ELSE. I actually went in there to just grab another flavor of BSN Syntha 6, but Oh NO, the rep wasn’t having any of that. He practically forced Cellucor’s protein powder on me like his life depended on it! I actually think had I not caved and bought the stuff that he would’ve put down his own money for me. But at least he grabbed me a good flavor. Why don’t we talk about the Cellucor Cor-Performance Whey flavor first.

Luckily for me, I am a member of one of those fun supplement clubs where you share the different proteins and pre workouts and stuff. This time, my girls and I apparently all went to the same GNC because we LITERALLY all bought Cor-Performance Whey within like a week of each other. I had the Molten Chocolate, Sarah had the Cor-Feti, and Alex had the Red Velvet. These are kind of unorthodox flavors I know, but at least we got to try something a little out of the norm instead of your standard just chocolate or vanilla. Let me tell you which flavor was my favorite:

In MY opinion, the best flavor was the Cor-Feti. This protein is named after the funfeti cakes that we all love and sometimes eat too much of. There are even some bits of the actual colorful confetti floating around in the powder to give you the sense that you are actually drinking cake batter from a protein shaker. It’s literally so cool. The other thing that you can taste is the frosting. I don’t really know how they made this protein powder taste like frosting, but it’s amazing. The texture is also super smooth, and even though we didn’t use a real blender, there were no clumps at all. I thought cor-feti was hands down the best flavor of Cellucor Cor-Performance Whey.

The second best flavor of Cellucor’s protein was the Molten Chocolate. Unlike the Cor-Feti, this was wasn’t quite as fancy. I know. I was also hoping somehow it would magically have alternating textures of hot, gooey fudge and light, fluffy cake, but that’s literally impossible. But somehow they seemed to capture some of that ‘reality’ in the birthday cake flavor! I suppose it’s just harder to do in the Molten Chocolate. What are they supposed to do beside put actual liquid fudge in the powder itself. That wouldn’t work now, would it. But this tastes mostly like just a really good, rich, hearty chocolate protein milk. It’s super tasty. If the Cor-Feti is a 9, than this is an 8.5.

The third place, or ‘worst’ protein flavor by Cellucor that I tried was the Red Velvet. I was not a fan of this flavor of the protein powder because it really did lack the sweetness and richness of the other two. Nobody likes a red velvet cake more than I do, trust me, but this one didn’t do the name justice. I also found the texture to be thinner, and just overall not as good on any level as the Cor-Feti or Molten Chocolate. There are better options if you are going to buy Cellucor Cor-Performance Whey. Let’s look at the formula now. To cap off flavor- 2 of the 3 that I tired were stellar, so I’m sure the rest of the menu is good as well.

I feel like I’ve reviewed so many pure Whey formulas recently! Nobody wants to put any casein or egg in there anymore the way Trutein does. This protein powder is good, but it could be better with a more diverse formula profile. Basically, since it’s whey protein only, this means the protein shake will be digested and absorbed very rapidly. This is good if you JUST worked out, but if not, you probably want something that will just fill you up and curb your hunger for awhile. A really good option for that can be found in our Top Ten Proteins for Women this year. Awesome list. But back to Cellucor. Here are the macros:

I think this is pretty standard, although it’s just a tad more calorically dense- many are just around the 100 calorie mark, like Clutch Bodyshop Whey for example. Clutch Bodyshop also had less salt, which, if you’re watching your sodium intake- 7% RDV is a decent amount. This product also uses artificial flavors and sweeteners, whereas Clutch Bodyshop does not. But who really cares. We put worse things in our bodies every weekend people. Overall I’d give this protein a ‘B’ on the formula. It’s basic. The whey isn’t the highest quality- but most people will tell you whey is whey. So. Let’s talk about Cellucor Cor-Performance Protein packaging now.

Cellucor has literally built a company on branding. Their packaging is probably my favorite within the traditional ‘mens’ product space, and just feasting your eyes on this protein, you can see why. The protein jar is black, and has some more subtile elements than most Cellucor packages. If you read my C4 reviews you know I’ve ALWAYS been a fan of that sort of ‘construction zone gone wrong’ look. And obviously I’m not the only one. Just look at what Cellucor has done over the past few years. They’ve basically taken the sports nutrition segment by storm. It’s amazing. But Cellucor Cor-Performance Protein is a little more subdued than C4. The scheme is dark, with less glitz and glam. The word ‘WHEY’ is painted across the main label panel in a bold statement of the product’s main ingredient. The use of bold italic fonts is prevalent throughout the product, and the layout is organized and well-spaced to boot. I can easily digest all of my product information on the Cellucor label, and I love even the background stripes on here. It’s wonderful in most ways. Cellucor never lets me down on packaging, and this product is another example of their design mastery. Well done, Cellucor.

Cellucor is that company that you can always count on for a good clean product. They tend to make less ‘natural’ products than some, and just focus on doing what they do best which is making really good strong classic supplements. Their protein is just that- an average formula, great taste, great looks. Cellucor Cor-Performance Whey is a really strong product at a fair price.*