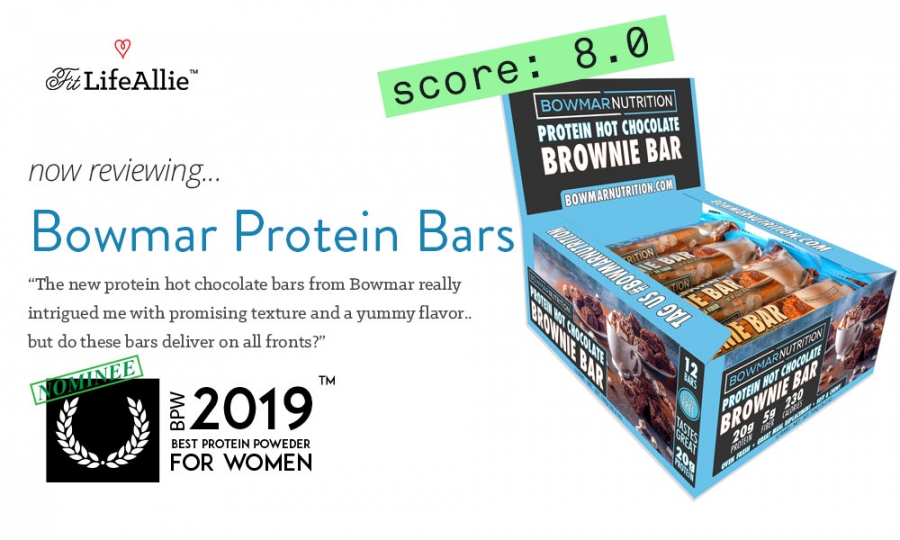 I finally got my hands on some Bowmar Nutrition Protein Hot Chocolate Brownie Bars, and in this review, I’ll tell you what I think of them. Bowmar Nutrition is one of the more popular companies right now and in this Bowmar protein bar review, I’ll tell you what I think of one of their tastiest new products. I’ll go over the flavor (there’s only ONE right now which is interesting), the formulation, the packaging, and then I’ll even compare it to a few other popular bars on the market right now in case you’ve tried them you can have some grounds for comparison. If that sounds good to you, let’s just crack this Bowmar bar open, take a few bits, and get our Bowmar Protein Bar review started.

Bowmar Nutrition seems to be exploding the same way Alani Nu did back in 2018. Yep. You heard it here first. Bowmar is the new Alani. You can even tell by looking at Instagram that the Bowmar’s are not messing around. They are rolling out tons of new products, new flavors, and are signing sponsored athletes left and right! It’s pretty cool to see. At first I was skeptical of their products, but after trying their Bowmar Protein and the Bowmar pre workout, I became somewhat of a believer rather quickly. So without boring you with too much of an intro- what I’m saying is that the Bowmars know what they’re doing, and they do it very well. Once I realized that they have a protein bar on the market, I quickly scooped up a box. Let’s go over some initial thoughts even before I tasted a Bowmar Protein Hot Chocolate Brownie Bar:

Like I said- the Bowmar branding is strange to me. It’s not really BAD it’s just strange! It’s like 1st Phorm aesthetics but made slightly more playful in a way? And in playful I mean less professional? Lol I’m so harsh on branding but it is very odd branding. It’s almost like someone who is used to designing alot of website graphics generated the Bowmar labels. There’s just something off about them. Maybe the fonts with the letter outlines…maybe the massive photographic elements…whatever. I guess it works for them so who am I to judge. It is unique, if nothing else! Lol. And I guess they DO do a good job of making the packaging very informative. I mean. There is a ton of text on these things. Like. A ton. Let’s move on and talk taste though.

The Bowmar Protein bars have a VERY interesting taste. I can kind of see why they call them ‘brownie bars’ because the texture, while not that of actual oven-fresh brownies, does have a certain textural quality that reminds me of those pre-packaged little Debbie fudge brownies that we used to get form the gas station. They were sort of plastic-y tasting but oh my gosh remember how good they were?? These Bowmar protein bars don’t quite have those same FLAVORS, but they do have a great soft, chewy texture. I think the texture is the best part of the Bowmar protein brownie bars, without a doubt.

The Bowmar bar taste itself..hm.. it is not bad TBH. I think it’s better than Quest’s standard chocolate flavor.. and it might be better than the Oh Yeah One bar.. it sounds crazy but while I LOVE chocolate, I’m actually not a huge fan of chocolate or brownie-flavored protein bars. They all tend to have some sort of underlying notes that compromise the real chocolate flavor for me.. and this is an example of that. I will also say that to me this bar doens’t really taste like hot chocolate at all.. yeah it has these little marshmallow bits in it but I just don’t think it tastes anything like hot chocolate. sorry. These Bowmar bars are sweet, but the flavor itself comes up just a bit short. Just sort of chemical-y. Like I said- a little plastic-y. But the texture is good. Let’s move on to the ingredients and see what these Bowmar protein bars are made from.

The Bowmar protein bar ingredients are super interesting to me because I did notice some great texture with these bars. I was super curious to figure out what they are made from. Why don’t I go over the ingredients and macros and then review my thoughts on each, starting with the macros:

NOTES: These are pretty standard protein bar macros.. I’ve seen better and I’ve seen worse. I don’t mind that the amount of fiber is relatively low at 5g - sometimes the Quest bars and others with crazy amount of fiber make me fill sick to my stomach but these digest really well. The fat is a little bit high especially the saturated fat at 4g..and the sugars could be lower but 5g isn’t going to make or break my day of eating.. and then the protein content at 20g is very standard. Nice and stout at 20g. So. Nothing to really write home about with these macros. They are pretty straightforward. Let’s talk ingredients.

NOTES: So I have definitely seen ‘cleaner’ protein bar formulations.. I will say right off the bat I am not a fan of the soy content in this bar and you can see it’s not just the lecithin but they have full-blown soy protein isolate very high up in the ingredients section which means there is probably a good deal of it included.. what else.. the sweeteners used are sucralose and maltitol which are artificial.. not a huge issue for me but just something to be aware of. Other than that (and even with all that) this is a very standard protein bar. I’ve seen this formula a thousand times.

So the macros and ingredients are super standard for a protein bar. Very similar nutritionally to a Fitcrunch bar or a ProSupps MyBar or one of those.. I will give them a 7.5/10 on the ingredients and macros. Let’s wrap this Bowmar Protein Hot Chocolate Bar Review up now, shall we?

- These bars sell for $34.99 for a 12-ct box off of the Bowmar’s website, and come in just the one hot chocolate flavor

- I found the bars to be sweet, but miss the mark on ‘hot chocolate’ flavor. The texture, as the Bowmar folks claim, definitely IS nice and soft though, I’ll give it that

- The Bowmar Protein Hot Chocolate bars are made from dairy-based protein, include some artificial ingredients, and have relatively standard macros for a protein bar

I would give the Bowmars about an 8 out of 10 on this bar. The taste is okay. The texture is above average. The ingredients and macros are just sort of ‘meh’ / standard.. I’m not sure there is enough pros here to justify the crazy price over getting some Fitcrunch bars at Costco for a fraction of the price.. but. I’m glad I tried the Bowmar bars. They are alright if you’ve got the cash for them!*