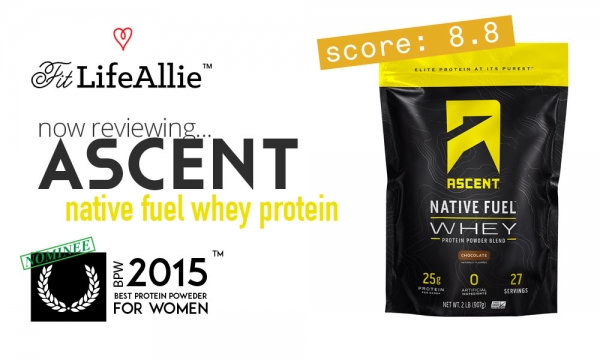 Well hello everyone and welcome to another thrilling Fit Life Allie protein review! Today I’m going to review the Ascent Native Fuel Whey protein by an exciting new company called, you guessed it, Ascent! I had the pleasure of sampling two flavors of this tasty protein powder and today I’m going to share it with you. In this Ascent Native Whey review, we’ll discuss the flavor, the formula, and of course the packaging. Hopefully I can paint a pretty clear picture of what this protein powder is all about, from start to finish, outside to inside, front to back. You know I’m getting awfully good at these protein powder reviews! My Ascent Native Fuel Whey review aims to be a spectacular example of my skills. You’ll see. I make them fun with my words of masterful reviewing awesomeness. So if you’re considering the Ascent Native Fuel Whey protein, you’ve stumbled on a fantastic resource. Let’s start the fun.

Native Fuel Whey is supposedly ‘Elite Protein at It’s Purest’. I won’t even try to explain the ‘science’ behind that statement…but from what I remember at the booth, it’s basically some sort of special extraction process that they use that is supposed to create a protein that is somehow more pure than some of it’s competitors.

I had the chance to try two flavors of this whey protein, courtesy of the kind folks at the sampling booth at the Atlanta Crossfit Games, which were hugely entertaining by the way. Highly recommend going. I will admit I was the last person who had their hand in the air when my brother in law asked ‘who wants to go watch crossfit’, but when he mentioned there would be all kinds of free awesome fitness stuff there, you can bet my attitude changed just like that! Ascent was one of the first brands that caught my eye because the black and yellow reminded me of that cute bumble bee/ Mustang transformer. How bad could this protein be? I practically skipped over to the booth, much to the delight of the Ascent ‘Natives’ let’s call them. I was offered to sample both the chocolate and vanilla flavors of Ascent Native Fuel Whey. Here is my evaluation of both flavors of Ascent Native Fuel Whey:

Ascent Native Fuel Chocolate: I think the chocolate flavored Ascent Native Fuel Whey is pretty interesting. Interesting probably isn’t the first word that comes to mind when you are reading a protein powder review, but the fact is that this protein powder should really taste better than it does. Protein powder flavoring has come so far. And this one, well, it just wasn’t all that great. I found the shake to be a little warm and watery first of all, which there isn’t really an excuse for at a sample booth. Not to be too hard on the Ascent team, because they were very friendly. But I found this chocolate flavored Native Fuel Whey to be short on flavor and short on texture. It’s drinkable, but it needs to be better to convert me to a fan.

Ascent Native Fuel Whey Vanilla Bean: The vanilla was better than the chocolate. I think we all expect the chocolate to have more weight and just be an overall more textured shake than the vanilla, which is why I think I was more receptive to the vanilla since it also was more on the thin and watery side. But it was more tasty in terms of the actual flavors. I found that the vanilla bean elements themselves were present- you know how vanilla bean has that sort of almost sharpness to it that sets it apart from a french vanilla? I think that’s what I liked most about this one. So if you are wondering what the best flavor of Ascent Native Fuel whey protein is, you can be assured that it’s the vanilla bean.

I like the formulation the best with this product. The Native Whey uses a super basic formulation that is really giving you almost entirely 100% pure protein. The formula contains:

That’s a pretty lean and mean protein formulation if you ask me! The one question/concern that I would raise is that this fancy-dancy ‘Native Whey Protein’ is only one of three protein sources included, and even then, it’s not the first one listed. Of even more concern is the fact that it is included in a ‘blend’ along with just regular whey protein isolate. What that leads me to presume is that there probably isn’t all that much of this fancy ‘native whey’ in this product at all.

But guess what? I don’t REALLY care. It’s marketing- let’s face it. There’s nothing all that different about this Native Fuel Whey than any other protein powder. But I can appreciate them putting their own spin on it. Even if there’s nothing terribly distinctive about native whey, it’s till a good clean formula. With only a half dozen ingredients listed on the ingredients panel, I think this is a protein supplement that is cleaner than probably 85% of what you find on the market these days. And that alone is reason enough to give Ascent Native Fuel a solid grade.

So why not give it even HIHGER of a grade? Well for me personally I actually like protein powders that have a slightly higher fiber count and then also protein powders that use blended sources. I think adding some casein to the mix would give this product that slow-digesting aspect that some of my favorite protein powders use. But that’s just one girl’s opinion. For more hardcore athletes that need a pure whey protein, Ascent Native Fuel is probably a super great option.

Whew. I can critique their taste and their formula all I want, but let’s all go ahead and give credit where credit is due. This protein bag looks DANG good. Not just ok. Not good. It is DANG good. It’s just so pleasing to the eye. I think it walks such a beautiful line between being masculine and hardcore and natural. It’s athletic and purposeful looking, from front to back, top to bottom. I think the black and yellow is a tough color scheme to pull off, but boy has Ascent done it, and done it REALLY well. The best part is the topography line art pattern that creates a sort of backdrop to the featured graphical elements that stand in front of it. The Ascent logo is a big, bold, stylized ‘A’ that sort of resembles cupped hands offering their palms over a mountain top. I’m not sure if that is what it is supposed to look like, but that’s what I see! I think The name Ascent and the word Native work well in unison, and create the feeling of something that both natural and purposeful at the same time. That’s the best way I can describe this aesthetic overall. It’s aggressive but naturally so. It is SO attractive. Possibly the best protein packaging I’ve seen this year, so a big congrats to Ascent for this praise.

I think Ascent has a little bit more sizzle than steak, but is a really solid protein powder none-the-less. I think this is a product and company that will thrive.*