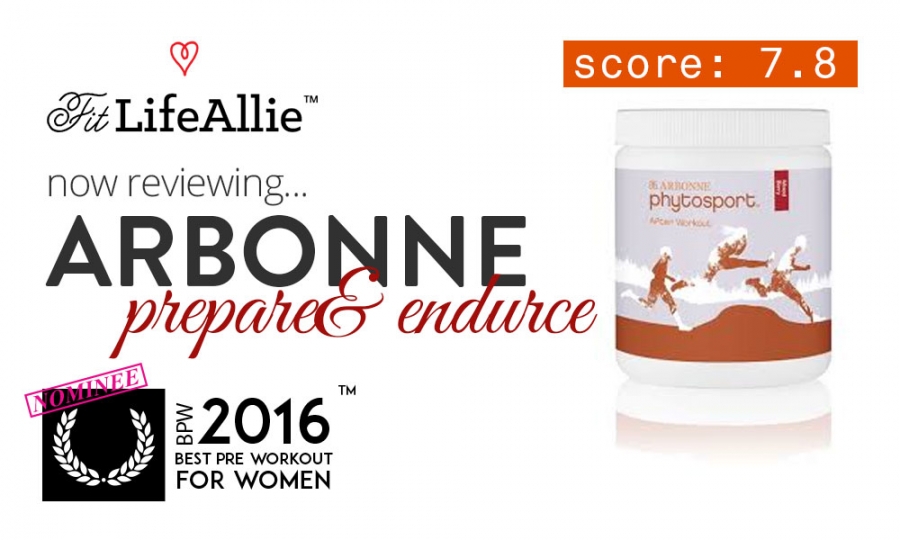 Arbonne International is a big old company that makes tons and tons of different products for athletes ranging from casual fitness enthusiasts to, well, less casual fitness enthusiasts. But still casual. Today I’m going to review their pre workout supplement: Phytosport Prepare and Endure. Arbonne strikes me, and most people as a supplement company that’s basically more of a general health brand. They probably sell tons of vitamins and makeup and soap, which is what they are most known for. But I do want to make sure I’m covering some of their more sports-related products as well. So in this Arbonne Phytosport Review, I’m going to do just that- focus on probably their most serious sports supplement in the entire line: Arbonne Phytosport Prepare and Endure Pre Workout. I’m going to talk about the flavor, the ingredients, the performance, and even the packaging. That’s right. No proverbial Phytosport Prepare and Endure stone will be left unturned. Let’s jump right in. We’ll start with the TASTE.

The Prepare & Endure comes in one pretty tasty flavor: Orange Pineapple. It gets a score JUST outside the A range because I think it needs just a touch more bitterness or sourness. Maybe that’s just me being used to pre workouts from more traditional sports supplement companies who’s products taste like sour candy- but I think if you buy Arbonne Phytosport Prepare and Endure, you will agree that the taste is just a little bit flat.

The first sip of the oragne pineapple is good. Well. All sips are good. The flavors are authentic, and taste very real. It’s tasty. The sweetness level is on point, and I think the level of sodium balances it out rather well. You can definitely taste the stevia in here, but that might be me being overly sensitive to the stevia taste. I would love to see Arbonne churn out some more flavors of Prepare and Endure.

One note* is that this pre workout does use a pretty significant amount of sugar, which is a huge factor why the pre workout tastes so good. Most pre workouts are very close to, if not entirely sugar free, so if you are looking for one of those, you might have to bypass the Arbonne Phytosport pre workout. Another reason you may want to bypass it lies in the product’s performance.

Folks who are not used to pre workout will get better results out of this one than I did. The problem is that I’ve tried literally over a hundred different pre workouts (and reviewed most of them), so I guess you could say I’m a pretty tough critic.

I’m also a huge stim-junkie, and since this one actually contains zero stimulants, It was hard for me to really ‘feel’ this pre workout improving my performance. You really need to be super in-tune with your body to feel any real impact of Arbonne Phytosport Prepare and Endure. I took this pre workout today before one of my most diesel workouts ever- a leg workout that morphs into a shoulder workout. You can’t really do this workout ‘sober’ if you want any chance of making it through. So as the workout dragged on, and I felt drained quicker than usual, I guessed correctly, that this stuff was stimulant free.

If I had to give some credit on performance, I would say that Phytosport pre workout did improve my endurance during the last reps of each set, and probably did help me get through to the end of the workout (I’ve quit it before several times). But really what I like in pre workouts is energy, and focus. This pre workout by Arbonne doesn’t really shine on either of those criteria. Let’s look at the formula and see why that is.

Again. The formulation supports my opinion that Arbonne’s typical client is not the bodybuilding, powerlifting, hardcore athlete (but really Calvin Klein clerk) that is Allison mother-trucking Lewis. This pre workout is for stay at home Dad’s and folks who aren’t familiar with REAL pre workouts.

The formula is stimulant free, and really devoid of any focus or brain-boosters. There is some citrulline, but not nearly enough to give you a good pump. So pump-lovers look elsewhere. And by elsewhere I mean the White Rapids pre workout by Controlled Labs.

The things that I DO like about this formula are that:

Stimulant-free is a nice change of pace when you are feeling a little strung out: I have had severe adrenal fatigue in the past, and during those stimulant breaks, it is still good to have SOMETHING in you as a pre workout. This would fit the bill.

Sugar: What makes it unattractive to most of you is also going to make it attractive to a smaller subset of you. Sugar is a performance booster don’t get me wrong. It’s probably responsible for over 75% of the endurance boost I spoke of in the performance section.

L-Carnitine L-Tartarate: This is the really the spotlight ingredient for me, along with the D-Ribose. Both can help athletic endurance tremendously when dosed properly. The fact is there isn’t really that much of it in Arbonne Phytosport Prepare and Endure, but hey at least the thought is there.

Overall this isn’t all that bad of a formula. There are all sort of vitamins in here as well, if you are into that sort of thing. I prefer to get the micronutrients through my diet, but some folks are going to benefit from having them included in their pre workout.

You’re probably thinking that a ‘B’ is higher than I typically give products with this aesthetic. And you know what? You’re right. I’m usually much tougher on the more subtle graphics than I am going to be on Arbonne. But the thing that is keeping Arbonne Phytosport Prepare and Endure in the ‘B’ range is that this label MATCHES the product very well. You’ll see the times where I REALLY get upset or give a lousy packaging grade are when the visuals don’t align to the products performance.

But the Arbonne pre workout has graphics that actually match up quite well with the product’s performance and really it’s identity overall. It uses simple, natural colors, and a very simple, yet trendy graphic featuring a runner coming up out of their starting crouch. The Phytosport Prepare & Endure pre workout features a silhouette of a pine tree-line interwoven with the foreground and background that is very prominent, possibly at the expense of the product title. The flavor graphic should be bolder, as should the name and purpose of this pre workout. But overall it’s not so bad.

I’ll be straight up with you- $50 for 20 servings of Phytosport Prepare and Endure is just absurd. The product is not that great at ALL. Formulation-wise there is virtually no ‘meat’ on it that would justify this SUPER premium price. As a product, sure, I think it’s fine. But not for that price. No way.*