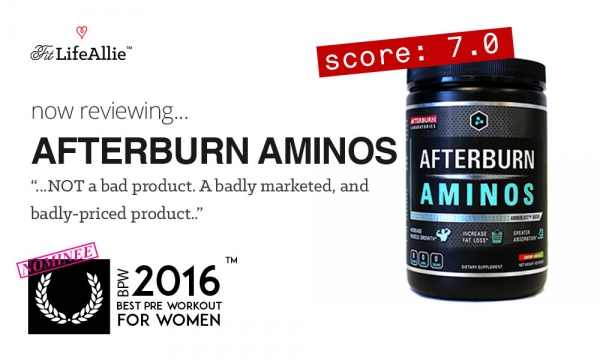 So. I suppose we should discuss the Afterburn Aminos that are on everybody’s mind. Yes. I’m talking about the Afterburn Aminos from sixpackshortcuts new house supplement brand called, hem, I don’t even know what it’s called. Ah. There it is Afterburn Labs. Interesting. But. Yeah. I am off to a choppy start here. Let me tell you what we’re going to cover in this review. The main thing is the formulation. I’ll tell you what’s in it, and if it’s worthy of its rather hefty price tag. The next thing I’ll do is talk to you about the flavor. Do Afterburn Aminos taste good? What is the best flavor of Afterburn Aminos? You probably need this info. And I’m going to give it to you. The last grading criteria for our amino acid reviews is of course the packaging. Do Afterburn Aminos look the part? I’ll also tell you any performance notes after having worked out with Afterburn Aminos twice now. But. Usually these BCAA supplements all perform more or less the same. Let’s get the review started.

I haven’t done a BCAA review in quite some time- so I’m excited to get back on track with Afterburn. I think this product has some interesting marketing behind it. And so why don’t I start with a very brief cautionary note to everyone. Eh. Not even cautionary. I don’t think Afterburn Labs is really OUT TO GET you, but I do think they sell a little more sizzle than steak. Because the fact of the matter is that Afterburn Aminos are no different from any other BCAA on the market. But they seem to be charging an arm and a leg more than everyone else. So what gives? I’ll tell you. Afterburn is clearly trying to sell these things to folks who, no offense, probably know nothing about supplements. And to a first time supplement newbie, Afterburn Aminos sound great. From the dude in the promo video. From the fancy write-up on the website…you would think Afterburn Aminos are your only magical key to a six pack. But they just aren’t. And I think that’s what you really need to look out for. Afterburn is going to romance their BCAAs to a little bit of an unrealistic point. But let’s talk about the product itself, and you’ll see where I’m coming from.

Sure you have your BCAA in here. About 5 grams worth total, in roughly a 2:1:1 ratio. Meaning two parts of Leucine to the iso-leucine and valine. That’s standard. The other surrounding ingredients in Afterburn Aminos are 2.5g of glutamine, a good add-on that does help build new muscle mass. Some citrulline malate rounds out the formulation along with electrolytes. Add in some artificial flavoring and sweetener, and you have yourself a very standard BCAA supplement from a formulating point of view. Sure not all of them have a big hit of glutamine, but, still. I don’t think 2.5 grams of glutamine per serving is enough to justify such a big price difference between this and some of the others you find out there. But I will give Afterburn Aminos a B on formula. It’s pretty sound. Let’s talk taste now.

Can you start to see a theme here? I can too. I tried the Cherry Limeade flavor of Afterburn Aminos, after being ‘let in’ to the secret Afterburn Aminos test club. (That’s something to be aware of from these guys. They really try and grab all of your info up front.)

The flavor is very basic and what you would expect from any branch chain amino acid supplement. You can taste that oh-so-familiar artificial sweetener sort of clinging to the back of your throat as you drink this stuff down. It’s not unpleasant to be honest with you. The flavors are fruity, and the drink itself has decent balance of sweet and tangy. Some of these amino drinks are either too sweet or too tangy, but this one is nicely composed. I think Afterburn Aminos could do with a little more of a ‘natural’ flavor, and I say that because the sort of fruit profile they have included in this one is not particularly natural tasting. In fact at moments it tastes like a cherry coke. And heavens knows that stuff is about as artificial as it comes. But. Overall not so bad of a job for Afterburn Aminos as far as flavoring. Let’s talk briefly on performance.

Sigh. Here’s the thing. These aminos ‘work’ about as well as any of the other BCAA supplements that I’ve reviewed. But they DON’T work as well as you expect them too. And that’s really my biggest problem with Afterburn Labs, and Sixpack Shortcuts in general. There ARE no shortcuts guys. There is just one way to get what you want, and that is hard work. You need to understand this. Afterburn Aminos are one way of helping, but you just are not going to get a Sixpack just from drinking Afterburn Aminos. I’ll tell you that right now. But. Sure. Afterburn Aminos will boost your endurance and recovery a little bit. Let’s wrap up with packaging.

I forget which ones. But I think Legion Athletics looks very similar when it comes to packaging. The dark them with metallic silver and teal creates a very futuristic, modern look. But one that has become so standard that it also looks generic. Like they went to someone and said ‘make a supplement that looks like a supplement’. And out came Afterburn Aminos by Sixpack Shortcuts. It’s just not very imaginative. So there’s that. The hierarchy and structure is perfect, with the name Afterburn Aminos big and bold and prominent. I like their use of icons to convey the benefits. Actually it’s very much like a Pre-Jym in that regard. Or any of the Jym line. Hm. That’s it! Gnarly nutrition uses this color layout too. So maybe Afterburn Aminos takes some design cues from Gnarly and their Gnarly Pump pre workout packaging as well. Overall it’s not a terrible look though. I’ll give Afterburn Aminos a B plus on overall appearance. Alright. Let’s move on to the review summary.

It’s exactly what I though it was guys. Afterburn Aminos are over-hyped and over-priced. Which is a shame. Because it’s NOT a bad product. It’s a badly marketed and badly priced product. And for that reason alone, I would not recommend buying it. You can get virtually the same exact product as Afterburn Aminos for half the price.*