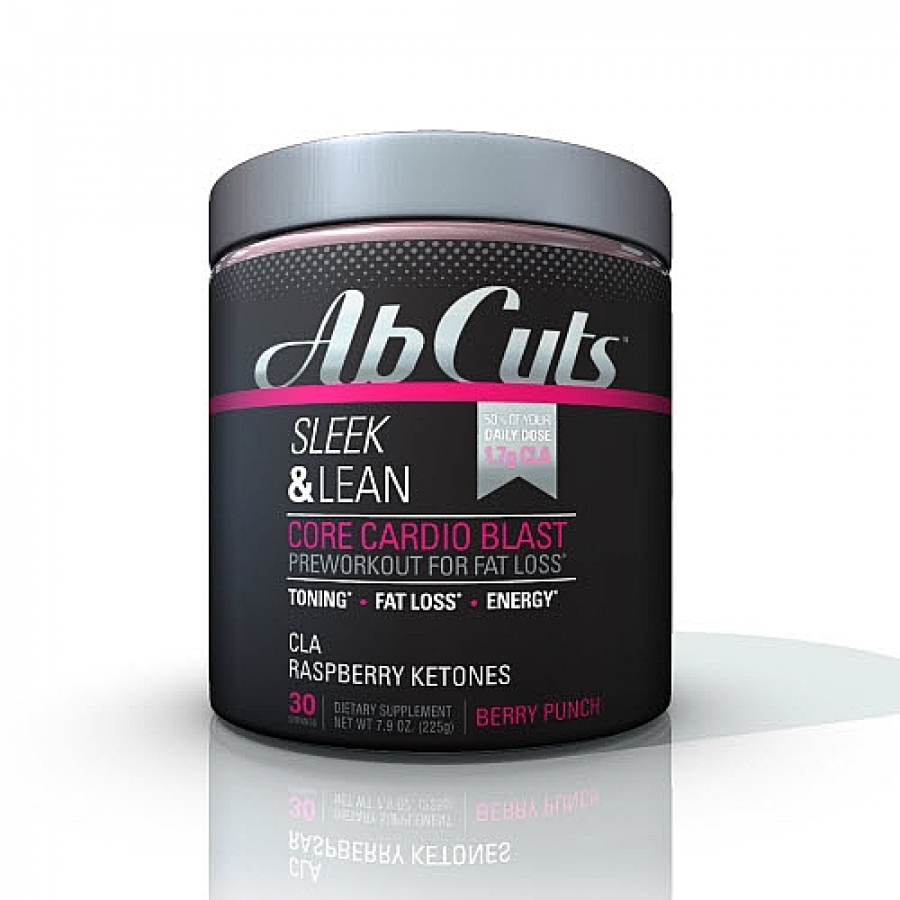 Although the official pre workout for women rankings for 2013 are officially in the books- I figured that it is time to start testing the latest products in the category in preparation for what will be the second annual women's pre workout rankings. 2014 Promises to be an awesome time for reviews as the category just keeps getting bigger. My latest find is the Ab Cuts Sleek & Lean Core Cardio Blast. Try saying (or typing!) that ten times fast! Whew. I found this product at my local GNC- and knew I had to give it a try. I'm going to try a different format to my review this time. Instead of simply rambling about my experience, I'll try and break it down into a couple of different categories. I think the key areas to focus on are taste, formula, performance, and value to tie things together before giving a final ranking at the end. Lets get into it!

The flavor I tried was called berry punch. It seems like almost all the women's varieties of pre workout's these days start with berry, so I was a little disappointed that Revolution Lifestyle didn't go a little outside the box with their flavoring. That being said, I didn't mind their berry punch. They balanced a decent amount of acidity with some sweetness in a flavor that works pretty well as a whole. One thing I will say is that it is just a little too sweet for my taste buds- but I'm very sensitive to artificial sweeteners and don't really like overly sweet drinks. I think they could've improved the flavor (and the overall product) by utilizing an all-natural sweetener like stevia. Critics aside, I think the taste of Ab Cuts Sleek and Lean is pretty good- I give it a seven and a half.

Per the usual- I am going to come down hard on the formula side. For those of my readers that are familiar with my other reviews- you know I don't give any of these products a break when it comes to the actual formulation. Let's start with what I DO like from this formula. First of all, the formula isn't overly bulky- and clearly isn't loaded down with fillers. Weighing in at just over 7 grams- the formula is drinkable and light, despite the inclusion of (some) maltodextrin (filler). In terms of actual ingredients that I like in here, I have always been a fan of Rhodiola, which is a popular add in to almost any pre workout these days. But I really enjoy the natural energy kick that Rhodiola can provide. It also works nicely in synergy with caffeine. On the caffeine front, Sleek and Lean has a modest 100 grams. I actually find this to be a sweet spot for me, as I have found anything too far over that dosage and I start to get jittery. This formula also includes the three BCAA's, which actually do contribute to the performance of the product to a greater deal than people think. These are the positives of the product.

Unfortunately, the Ab Cuts Sleek and Lean Core Cardio Blast formula has it's downsides. First and foremost- it's a proprietary blend. I sigh as I type this, because the supplement companies still get away with this madness with every product. Yes, the list out the actual dosages of caffeine, cordyceps, CLA, and arginine. Anything else is a toss up as to how much is actually in it. (Im looking at you BCAA's!). I don't think it's a coincidence that they do not disclose the dosages of the ingredients. This leads me to believe that they probably skimped on them. Other things I don't like in this formula are: (I'm going to vent a little bit here)..

There are numerous studies disproving the idea that conjugated lineoleic acid is a magical fat-burning ingredient. Stop the madness.

Having tried almost every pre workout supplement and drink on the market for women, I honestly knew almost exactly what I was getting with Ab Cuts Sleek & Lean. The formula is pretty standard, with some good and some bad ingredients as I have outlined above. The things that make this product perform relatively well are the caffeine, BCAA's, and rhodiola. I decided to give this product a shot on my hill sprint day. I crank the treadmill up to a 12 incline, fire up the speed to 9, and then run 30 seconds on, 30 seconds off for 15 minutes. (If you're looking for a challenging workout and are pressed for time- give this a shot!)

I was pretty tired going into the workout- so the pick-me-up that Sleek and Lean provided was a very welcome effect. I took one level scoop and funneled it into a 12 oz water bottle. Flavor is decent, but I re-filled the bottle numerous times before finishing it to cut down on the sweetness a bit, and to maximize my hydration. After about 20 minutes of marination I stretched out and got to work. My first six or seven reps went super well- feeling terrific and running strong. The next three I started to get a really good burn in my glutes and calves, and that slight burning sensation in your lungs when you are exerting at near-maximum capacity. I finished the workout strong and even banged out a bonus rep for 40 seconds for good measure. I really liked how the product performed for this workout, and might have to give it a shot during a resistance day to test it on some weights.

I forked over 33 bucks at GNC for my 30 serving tub of Sleek and Lean. Compared to others on the market- this is a pretty good deal. Money is really tight for alot of us out there during these times- so being able to get a solid pre-workout at just over a dollar per serving is a welcome surprise. I think this products is priced fairly, and would even dare-say they could get away with charging a little bit more. In summary- is this product perfect? No. Is it in my top- three or four all time? Probably not. But if you're looking for good value and a dependable workout boost, than Revolution's Ab Cuts pre workout might be for you.